Bradley Cooper has a message for all of the naysayers who believe he wasn’t deserving of People’s “Sexiest Man” tag: He agrees with you! Is this year’s “Sexiest Man Alive” planning to abdicate his throne?

Being Hollywood’s “Sexiest Man” isn’t all it’s cracked up to be. Just ask Bradley Cooper! 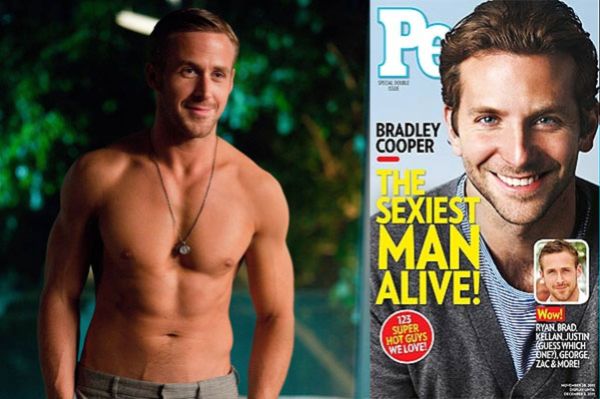 The Hangover actor was awarded the coveted title of “Sexiest Man Alive” by People magazine last month. But the actor quickly found that the accolade made him more aware of how “not sexy” he really is.

“It’s the worst. Oh, it’s just so awful. I’m finally at an age — I’m 36 years old — where I really don’t care about anything like that anymore, which is a wonderful thing and then it happened. And then I started to realize just how not sexy I am,” Cooper joked on The Graham Norton Show over the weekend.

“I have a lot of moments where I’m walking out and I’ll open up the door and think to myself, ‘I could do that a lot sexier.'”

Cooper still questions whether he actually deserved to win the “Sexiest Man” title — which many celeb gawkers predicted would go to rival hottie Ryan Gosling.

Gosling fans went a little bit nuts when Bradley won the crown. Some hardcore devotees even staged a protest outside People’s Los Angeles offices. Other Gosling Zealots launched a petition in support of The Notebook star.

“2011 was clearly The Year of Gosling and we demand People magazine give Ryan his own People cover,” read the petition, which, at press time, boasted more than 5,000 signatures from Gosling-Lovers.

Buzzfeed.com compiled a list noting the “63 Reasons Why Bradley Cooper is Definitely Not the Sexiest Man Alive.” Those “reasons” were all photos of Ryan Gosling, in case you were wondering.

But far from being peeved, Bradley concedes that he really is the lesser man… in the “sexy” stakes at least.

“There was such a backlash to when they announced it and Ryan Gosling — who I love and I just did a movie with him — he’s the greatest,” Brad told Graham.

The actor went on to say that a friend sent him a link to a website comparing pictures of him to pictures of Ryan.

“When I say ‘friend,’ I mean me, alone in my room, looking at the computer,” Cooper admitted.

“And it’s like him walking around and he literally looks like he’s in a photo shoot, like just came off the runway. And there’s ones of me and I literally look like the neighbor who never really comes out of his house and when he does, you’re like, ‘Maybe you should just stay in. We don’t know what he does in there!’ So it’s been interesting.”