Angelina Jolie says her kids want her to marry Brad Pitt — but she’s pretty sure it’s just for the delicious wedding cake. 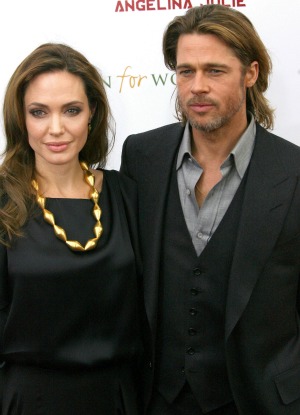 People get married for all kinds of reasons, but wanting to eat cake isn’t usually one of them. Angelina Jolie says that her kids often ask why she hasn’t married longtime partner Brad Pitt, but she’s pretty sure they have a deliciously ulterior motive.

When asked by Christiane Amanpour on Nightline if she and Pitt would ever wed, Jolie acknowledged that the six kids the couple shares ask the same question.

“The kids asked me the other day and I asked them if it was just because they wanted to have a ‘big cake,'” she laughed. “They see movies that have the people getting married in the movies or somebody’s, you know, the happily ever after. Shrek and Fiona are married.”

“We’ve explained to them that our commitment when we decided to start a family was the greatest commitment you could possibly have. Once you have six children, you’re… you’re committed.”

Did Angelina Jolie steal In the Land of Blood and Honey? >>

The couple is also committed to their own strong political opinions, which do not always mesh. Jolie explains that the big hot button issue in their home is the death penalty.

“I won’t say whose side anyone is on, but it’s the one, the thing nobody brings up at dinner because nobody wants us to go off on each other,” she said. “But it’s fun. It’s a fun debate, you know? It’s a good — you want to be able to have — to respect each other’s views and to not be exactly– we’re not identical. We have– we have strong views.”

One thing they do agree on is their plan to raise their kids as a unit. “It’s so hard with family in this business so we take turns working, so whenever one of us works, the other makes sure they’re there for the kids so we never have to split up the family,” Jolie said. “If it’s over five days, everybody’s got to move in a big traveling mass.”

The Academy Award-winning actress is currently promoting her directorial debut In the Land of Blood and Honey, in theaters Dec. 23.