Tyra Banks is a Top Model faker! Hold on to your seats, ANTM fans, turns out the model host has been playing viewers all along. 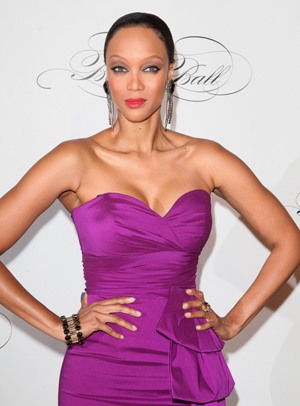 Tyra Banks has a confession to make to loyal fans of America’s Next Top Model. The ANTM head judge has been faking it all along!

The wise woman, bold and full of character, that we’ve come to know over 17 cycles of model wannabes has been playing us. Tyra Banks is nothing more than an actress, faking her way through the role of an expert judge.

During a recent CNN special, the 38-year-old opened up about how she’s been faking her confidence since ANTM began in 2003. “When I did my show, created my show or whatever, I also created a persona on Top Model,” explained the model and media personality.” And it’s a character. So when I’m sitting there and I have all this makeup on, and I’m like, ‘Your picture’s not fierce…’ talking all that and reprimanding the girls, that is a character.”

Tyra Banks went on to say, “I don’t do that, like, in real life; I’m passive aggressive. I’m anti-confrontational; I’m even in coaching to learn how to be confrontational.”

Insisting that she’s shy and insecure in real life, the woman who has held a successful modeling career beginning in the 11th grade went on to say, “So it’s a character, but people think it’s real. I’m so not sexy. I know how to turn it on for a picture but I’m not sexy in real life.”

Despite the lack of confidence she claims to suffer, Tyra Banks has appeared as an actress in numerous television shows and films such as Life-Size, Coyote Ugly and Love & Basketball. Not to mention the success of America’s Next Top Model and five-year run of The Tyra Banks Show, a self-titled talk show, for which she won a Daytime Emmy Award in 2008.

Could it be that in spite of all the success, Tyra Banks has been in need of her own advice all along?

Are you surprised to hear that Tyra Banks admits her on-screen persona is a fake?