Ryan Kwanten is getting up close and personal with Zooey Deschanel. The actor is set to play her love interest in a future episode of Fox’s New Girl. 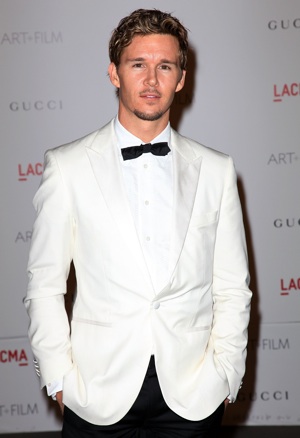 True Blood hottie Ryan Kwanten is taking a break from vampires and werewolves to concentrate on love. The Australian actor will guest star on an upcoming episode of the Fox comedy New Girl opposite Zooey Deschanel.

According to E! Online, Kwanten’s episode will be the most romantic yet awkward to date. Now that Jess (Deschanel) is single and ready to mingle, she’s preparing to celebrate her first Valentine’s Day (in six years) as a free woman.

Her first order of business is to have a one-night stand. Enter Ryan Kwanten, with his golden hair and sparkling smile. The actor plays Oliver, a nice piece of eye candy that catches Jess’ attention. The pair meet up at a bar but quickly discover they have absolutely nothing in common.

What could possibly go wrong between these two? Does Jess’ wingman Schmidt (Max Greenfield) hurt her game, or is Oliver more repulsive than charming? We’ll find out when the Valentine’s Day-themed episode of New Girl airs in Feb.

In comparison to Kwanten’s regular gig on HBO’s True Blood, New Girl is a piece of cake. Last season his character Jason Stackhouse was kidnapped, attacked by werepanthers and almost killed by a vengeance-seeking witch. Perhaps Kwanten’s taking notes from co-star Joe Manganiello, who recently appeared on an episode of CBS’ Two and a Half Men. Sitcoms can be supernatural therapy.

Season five of True Blood is expected to debut next summer and will feature plenty of new faces. One of the biggest casting additions is former Law & Order: SVU star Christopher Meloni, who’s rumored to play a secret but “significant” role on the vampire series.