Hilary Swank told Jay Leno that she really regrets attending a birthday party for the president of Chechnya. What did she do with the money she earned?

Related story From Movie Mogul to Man on Trial: A Timeline of Harvey Weinstein's Life & Crimes in Hollywood 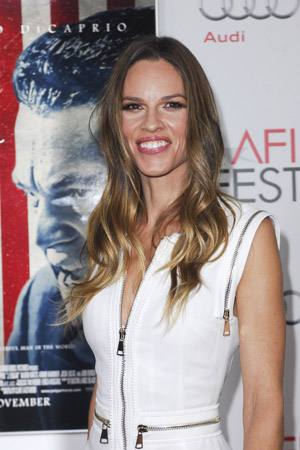 It’s the mistake that just won’t go away.

Oscar-winning actress Hilary Swank appeared on The Tonight Show with Jay Leno on Friday night to discuss her ill-advised trip to Chechnya in October.

“I should know where I’m going. I actually didn’t know Chechnya was separate from Russia. Now I know all of that but I had no idea,” Swank told Leno while promoting her new film, New Year’s Eve.

“Really, truly, for me this was a great honor to learn more about you and your country and what you’re building,” Swank said in the video. “Happy birthday, Mr. President.”

Human rights groups blasted her afterward, leading her public relations team to drop her as a client.

“Hilary Swank obviously has the right to earn a living entertaining the highest bidder, but this sort of venality should be exposed — especially after claiming she was not going,” said Human Rights Foundation president Thor Halvorssen in a statement. “Would she have accepted an invitation to entertain Pinochet? Al-Qaeda? The apartheid government in Pretoria? We must remember the disgrace Mariah Carey, Nelly Furtado, Beyonce and 50 Cent were exposed to after singing for Gaddafi’s family and earning millions of dollars for it.”

Swank admitted to Leno that she was paid for her appearance, but that she donated the cash right away.

“I donated all the money,” she said during her interview. “There’s always a silver lining on things and I’ve learned a lot about the incredible things that people are now doing, like I said, with Human Rights Watch, I’m working closely with them.”

Do you think Hilary Swank is sorry for appearing at the birthday party?