Community fans were in an uproar after the quirky Joel McHale sitcom didn’t make NBC’s winter 2012 schedule. Those same fans proved their point when they voted Community onto the TV Guide cover. This weekend, executive producer Dan Harmon spoke out in a late-night rant. 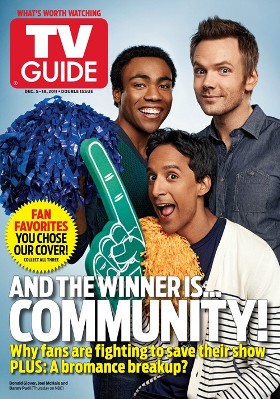 Usually when you hear about Hollywood players taking to the internet for a rant, it’s something along the lines of a Charlie Sheen winning moment. Community creator Dan Harmon, however, played it another way when he finally responded to Community getting cut from NBC’s winter 2012 lineup in the same month it landed TV Guide‘s “Fan Favorite” cover.

“I am very optimistic about this situation with Community,” Harmon posted sometime after 4:30 a.m. on Saturday. “Not in a naive, let’s-think-positive-because-we-may-as-well way. I am optimistic in a shrewd, practical, look at the situation and place the bet you’d place if you were betting your life way.”

Harmon wrote the post from his sick bed, after an eve of battling a nasty stomach bug on his very first night in his brand new home. There was a bit of rambling about his disgusting symptoms and even some flighty flu moments in the post, entitled Crucial Update on my Bodily Functions, but those only made Harmon’s overall attitude and message more impressive.

Harmon has faith in the Community community 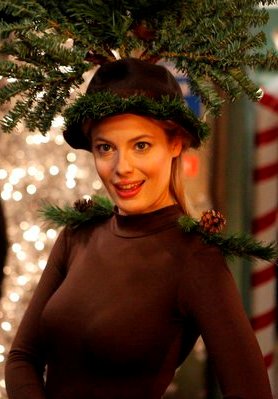 Why exactly does Harmon have faith in Community’s future? It’s all about the power of the show’s fans, as well as Community‘s rocking holiday episode, which airs Thursday as the show’s “unintentional finale.”

“The Christmas episode is going to be very well received, because it’s pointless to punch a man on a stretcher but more importantly, the Christmas episode rules,” Harmon blogged. “We’re going to have dramatically higher ratings because more people promote and watch holiday episodes, and it’s our unintentional finale.”

Harmon went on to recount the behind the scenes reality of how these past few weeks have played out, from getting pulled from winter lineup to seeing a ratings hike after the bad news dropped, not to mention landing the big cover.

“You guys are f*cking nuts, in the best way possible… You are in lockstep with a universal rhythm, here. You put our show on the cover of TV Guide BEFORE any of this was going down,” Harmon wrote to fans. “It looks from a distance like we got yanked and THEN there was this pity party of clicking on that poll to make some point, but that is not what happened, I was there the whole time watching. First, you won us that cover. And TV Guide swore us to secrecy. Then, NBC rescheduled us. Then TV Guide came to the set and took the photos of the cast and swore them to secrecy. We were half wondering if the network would pull strings to kill the cover because, well, you know, awkward much? My point is that when I look at the timeline, I don’t see a boring cause-effect chain. I see a weird, ironic, poetic blossom of mythology. I see story points. I see the folds in the universal cootie catcher, I see an absurdly happy ending.”

How can you help Community? 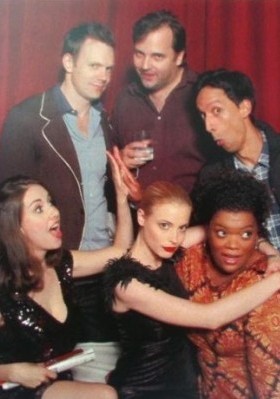 Like fans, Harmon (center right) would love to see Community on the schedule for January. He understands why the show was benched, however, and wants fans to stop blaming NBC’s Up All Night and Whitney.

“It’s time to give Up All Night the same shot every new show at NBC gets,” he explained. “They can’t air everything at the same time. They have to move stuff around and try to find the magic combination. It has equal potential to be exactly what we need. We were the obvious player to bench for a few. Yes, I’d love to be on the court forever but I’d also love to be taller and I’m not. It’s not exactly what I’d call stupid coaching.”

Harmon insisted he’ll spend the show’s break working on new episodes, so Community is ready to get back in session as soon as there’s a place for it on the schedule.

In the meantime, he asked fans to act like adults.

“Don’t send jaded tweets to shows or personalities you perceive as somehow competing with us,” he wrote. “If you’re over thirteen, you know Whitney Cummings doesn’t choose her time slot, and that we’re no more entitled to it than any other show. If creatives were running things, we would try to create a situation in which everybody got to see everything they wanted to see. And that is the landscape that is emerging, and it’s a less profitable one for the previous generation’s conglomerates, and it is those companies that prefer you to think your selection of one show over [another] defines you as a person and is a matter of life and death.

“The truth is, people that make you want to laugh are on your side, and people that want to make money off you laughing kind of aren’t, but they own everything and they get us connected to you.”