Tom Cruise told Indian reporters that he’s willing to get his dance and singing on in a Bollywood film.

Singing and dancing in Rock of Ages must have had a huge impact on Tom Cruise’s career. The actor — in India to promote Mission Impossible: Ghost Protocol — told reporters that he’d love to star in a Bollywood film. 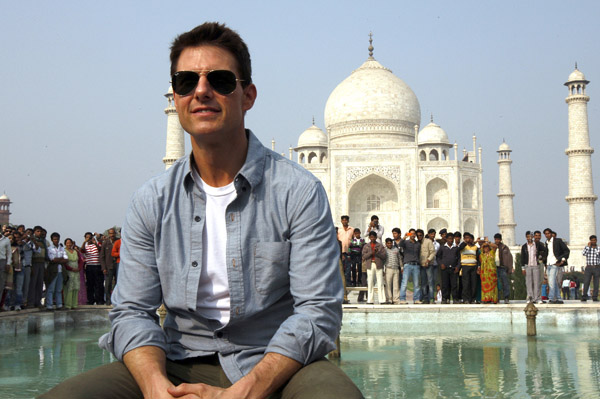 “I love watching Hindi movies. There are many Hindi movies that come out every year but I do watch a few of them. [If offered a Bollywood film] I would never say no. I would love to do it,” Cruise said in front of the majestic Taj Mahal.

Was he just trying to win over the Indian media? Possibly. However, Suri‘s dad reportedly “found himself” while performing as Stacee Jaxx in the upcoming movie adaptation of the popular Broadway musical.

“I did six months preparing for the movie and all my stunt training and all of those years doing that, it helped me with the choreography… I had started dancing because I was inspired by my wife. She kept saying, ‘You’ve got to do a musical sometime.’ Kate’s a dancer, so she would say, ‘Let’s go to dance class,’ and she would take us and that’s how I kind of came up with the idea of Les Grossman doing hip-hop. And then to take it to this level with this? It was really fun.”

Joking or not, we want to see Cruise strut his stuff alongside Aishwarya Rai or another hot Indian actress. Let’s make it happen, Bollywood.