Rumors are flying that country singer John Rich was kicked off a Southwest airplane over the weekend for being too drunk. 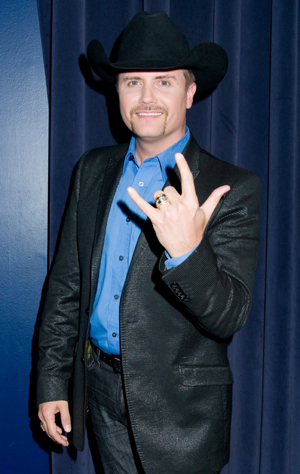 What happens in Vegas, doesn’t always stay in Vegas… especially when you are a famous country singer. Big & Rich star John Rich was reportedly kicked off a Southwest airplane yesterday heading from Las Vegas to Nashville because he was drunk, reports TMZ.

The plane was scheduled to leave at 10:50 a.m. and sources say that the country singer got into a “verbal argument with a couple of passengers before boarding the plane …and continued to display drunken behavior once he was allowed inside the main cabin.” Perhaps he had a strong Bloody Mary with breakfast?

The Celebrity Apprentice winner, who welcomed his second son in September, was reportedly approached by crew members asking him to get off the airplane — he was “cooperative” and “calmly excited the aircraft.”

Neither Rich nor his publicist are talking about the incident on Sunday, although it sounds like it his flight to Vegas on Saturday was much more enjoyable than his attempted flight home.

“Sitting next to @brookeburke on the plane to Vegas,” he tweeted on Saturday.

Southwest is also staying mum about the incident, only saying that a passenger was kicked off that flight, but refused the release the name of who it was.

“Our crew assessed the situation and determined that the passenger was not fit for travel under governing federal aviation regulations,” a rep for Southwest said in a statement. “The customer was rebooked on a later Southwest flight out of Las Vegas, but chose to make alternative travel arrangements. We have processed a refund for the customer and his travel companion.”

Was it John Rich — or just a celebrity lookalike? Stay tuned as the story develops.