Rosie O’Donnell is set to marry her girlfriend, Michelle Rounds. Find out how she broke the news to fans! 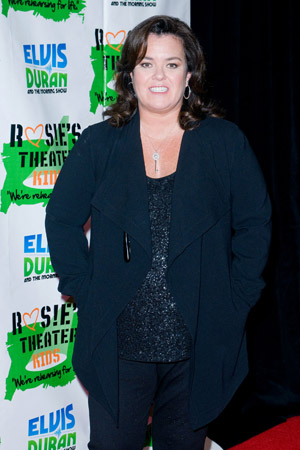 Rosie O’Donnell has plenty to celebrate this Christmas: She’s engaged to her girlfriend of three months, Michelle Rounds.

A source told US Weekly that the OWN talk show host announced her engagement during a taping of her show on Friday. The source added that O’Donnell and Rounds will say their vows over Christmas.

The couple went public in September at Rosie Theater Kids Gala in New York City. The former host of The View met the I.T. headhunter at Starbucks.

“[Rounds] is very attractive and friendly. Rosie was really proud and showing her off… They seem really happy,” a source said at the time. O’Donnell added that she was floored when she met her wife-to-be.

“I did not expect it when I met her at Starbucks,” O’Donnell told People in October. “She didn’t look like any lesbian I’ve ever met. But it’s fun and very exciting.”

O’Donnell credits new relationship — along with her new talk show, The Rosie Show — for helping her outlook on life. The outspoken actress and adoptive mother of four split from wife Kelli Carpenter in 2010.

“I’m in menopause and I’ve been having really bad hot flashes,” she told the magazine. “[My therapist said it’s] ‘because you’re also in love.'”

“It’s like you’re a withering rose and the petals are falling off and all of sudden you bloom again,” she added. “For me, [the hormones] have made a drastic difference.”