Kate Gosselin is a winner! At least, at least according to the motto written on her Las Vegas Marathon race T-shirt she is. 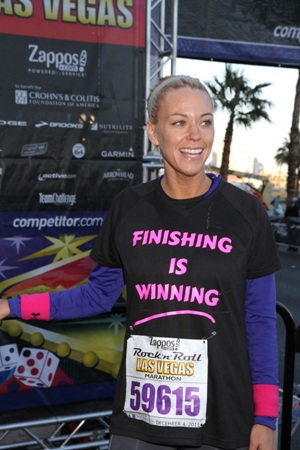 Her choice of attire for the 26.2 mile trek? Layers for the unusually chilly weather, topped by a T-shirt that read “Finishing Is Winning,” on the front and “My First 26.2 Is For All The Nonbelievers…” on the back.

“I’m not one to do anything lightly,” the 36-year-old told People before the race kicked off. “I either do it or I kill it. I guess this is considered killing it.” Four hours, 59 minutes and 21 seconds later Kate Gosselin crossed the finish line victorious.

Never far from her mind along the way were her eight children with ex-husband Jon Gosselin. “I’m running this because I want to show that with dedication and determination anything is possible,” Kate said. “I want them to remember this moment when their mom completed a marathon, knowing that nothing in life should stop them from attaining their goals.”

A lesson that takes a toll on the body, however! Kate, who has recently been the subject of plastic surgery rumors, added, “This will probably be one of the most painful messages I will ever impart to them.”

Once back to tweeting, Kate Gosselin sent a series of messages about the Las Vegas Marathon to her Twitter fans:

“I could barely walk from finish line..had to [be] helped! NEVER could have done it w/o running buddies…”

“So sore last [night hard time] walking..but today less sore&back in heels!:) Yes, ready to start training for next 1…to beat my [time]!”

As for her post-race indulgence, Kate Gosselin admits, “I ate 2.5 huge pieces of pizza and some penne pasta and a coke- not diet mind you! :).”