Peter Weller is returning to the sci-fi genre. The actor has been cast in J.J. Abrams’ highly anticipated Star Trek sequel. The RoboCop star will rub elbows with Captain Kirk and Mr. Spock in a mystery role. 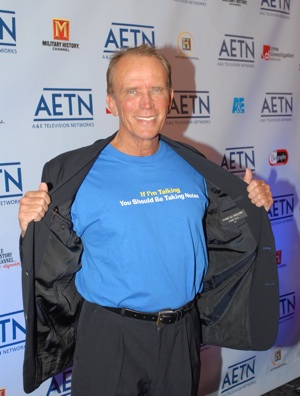 The cast of Paramount’s Star Trek sequel continues to grow with the addition of Peter Weller. The actor, who recently appeared on Showtime’s Dexter, is heading to space. Variety reports that J.J. Abrams has tapped the sci-fi veteran to play an unspecified role in the film.

Weller joins British actress Alice Eve as one of the newest additions to the cast. Eve’s role is also being kept under wraps, but it’s been revealed that she’ll play an original character created specifically for the movie. Another possible casting is Oscar-winner Benicio del Toro, who’s rumored to star as the film’s villain. But unlike Weller and Eve, nothing has been confirmed for the actor.

The untitled Star Trek sequel is currently in pre-production and is scheduled to hit theaters May 17, 2013. The film will once again be directed by Abrams from a screenplay written by Alex Kurtzman, Roberto Orci and Damon Lindelof. The film is expected to begin shooting early next year.

Peter Weller is best known for his role as Alex Murphy in Paul Verhoeven’s sci-fi classic, RoboCop. Despite his appearance in other notable projects, the 1987 film is his biggest mainstream credit. In 1993, he moved behind the scenes to direct a short film called Partners, which was nominated for an Oscar. His other directing credits include Homicide: Life on the Streets, Michael Hayes and Monk.