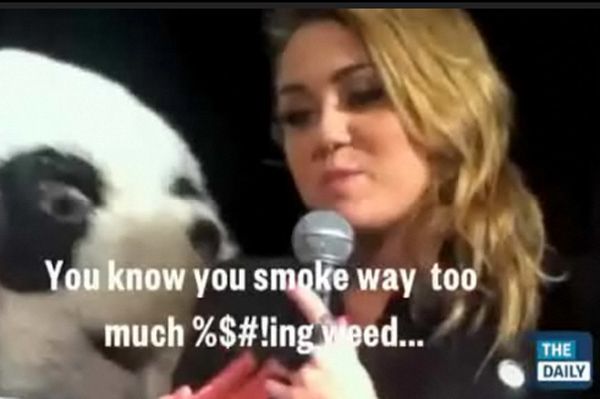 In the sketch, a giggling, munchies-eating “Miley” (played by Vanessa Bayer) makes cracks about the controversy on her side-splitting, self-titled talk show. Buscemi makes a guest appearance as a hippie-like stoner and Maya Rudolph drops in as Whitney Houston. As Miley laughs, Houston shows off random vocal talents and talks about drugs, passionately advising Miley to stay “off of that crack rock.” Billy Ray Cyrus (Jason Sudeikis) interrupts her to say that Miley “was just using marijuana.”

Cyrus’ “people” have been in damage control mode ever since the 19-year-old was videotaped quipping about smoking ‘”too much weed” at her birthday bash last month.

“You know you’re a stoner when friends make you a Bob Marley cake, you know you smoke way too much f***-in’ weed,” a smiling Miley told guests, who had presented her with a Bob Marley-inspired birthday cake.

Miley’s rep promptly came forward to defend her client’s behavior, telling TMZ that the teen role model was just being a “smart-ass” and “joking” when she made the comments.

According to the rep, the cake was an “inside joke” between Miley and Kelly Osbourne, who has been calling her younger friend “Bob Miley” ever since she was caught on camera smoking the “natural herb,” salvia, last year.

Perhaps Miley should consider being a bit more “smart” and a bit less “ass” when she opens her mouth on camera next time round.