It’s pageantry at its finest on an all-new episode of Hart of Dixie this week.

What do you get when you pit Zoe and Lemon against each other as pageant coaches? We’re about to find out. 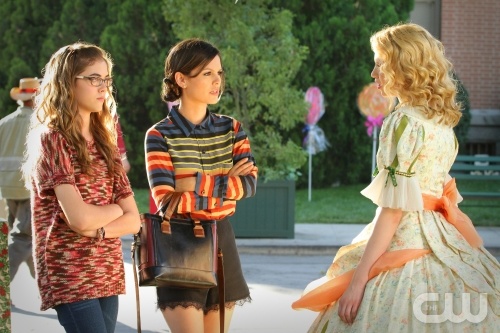 On this week’s new episode of Hart of Dixie, “Hairdos and Holidays,” it’s Zoe’s girl against Lemon’s girl for the Miss Cinnamon Cider Pageant.

Nothing could possibly go wrong, right? That’s an understatement as this friendly rivalry is kicked up a notch.

Elsewhere, Lemon and Lavon’s history is told through flashbacks and Wade and George venture out to get a Christmas tree for the town square.

Check out a clip of “Hairdos and Holidays,” then head back to the CW Monday night and catch the full episode…

The CW officially describes “Hairdos and Holidays” as the following: “Zoe (Rachel Bilson) encourages Rose (guest star McKaley Miller) to enter the annual Miss Cinnamon Cider Pageant even though Lemon’s (Jaime King) younger sister, Magnolia Breeland (guest star Claudia Lee), is a shoo-in to win. Of course, with Zoe coaching Rose and Lemon coaching Magnolia, rivalry takes on a whole new meaning. Meanwhile, George (Scott Porter) and Wade (Wilson Bethel) go on a road trip to pick up a Christmas tree for Bluebell’s town square. Also, in flashbacks, we learn some of the history of Lemon’s relationship with her mother, as well as the details of when Lemon and Lavon (Cress Williams) first realized they had a connection.”

With some your favorite shows going on winter hiatus now or in the coming weeks, we want to know, what will you be watching?”

read on for more Hart of Dixie

CW orders full season of Hart of Dixie and more!