It’s high society and secret feelings on an all-new episode of Gossip Girl! Keep reading to see a preview…

Roll out the high society welcome wagon — it’s time to officially declare Charlie a part of the Upper East Side scene. 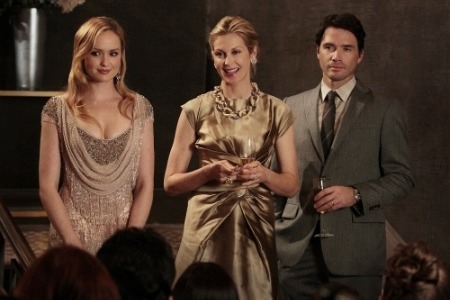 Charlie might be blending into her surroundings as a New York socialite, but Lily wants to make sure she gets the welcome she deserves on this week’s new episode of Gossip Girl, “Riding In Town Cars With Boys.”

While Lily is busy planning a “welcome to New York” society party for Charlie, someone else is busy throwing a kink in Charlie’s future — her ex.

Elsewhere, those secret feelings Dan has toward Blair are screaming to get out, but will they? We’ll have to wait and see.

Check out a clip of “Riding In Town Cars With Boys,” then head over to the CW to watch the full episode on Monday night…

The CW officially describes “Riding In Town Cars With Boys” as the following: “Lily (Kelly Rutherford) throws Charlie (Kaylee DeFer) a party to officially introduce her to New York society. Meanwhile, Charlie’s ex-boyfriend, Max (guest star Brian J. Smith), throws a wrench into Charlie’s future as an Upper East Side princess. Dan (Penn Badgley) decides it may be time to tell Blair (Leighton Meester) the truth about his feelings for her.”

Gossip Girl’s 100th episode will air in January and the cast was recently seen celebrating the big event in style in the Big Apple.

What do you think of the story and style on this season’s Gossip Girl? Is the fashion and scandal of the Upper East Side intriguing?

read on for more gossip girl

The boys of Gossip Girl