The Amy Winehouse Foundation is donating a sizable amount to a UK charity. Find out how her death will help children live. 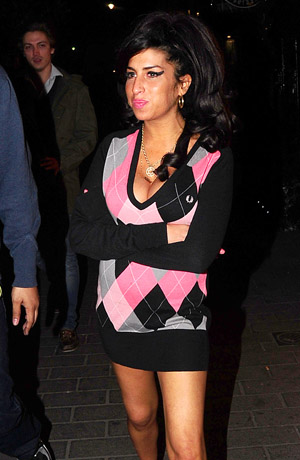 Some good is coming out of Amy Winehouse’s death this summer: The foundation built in her honor has already made its first contributions.

The Amy Winehouse Foundation donated about $15,000 to Little Havens Children’s Hospice, the organization confirmed Friday. The money will help pay for 600 hours of nursing care.

“On behalf of the charity I would like to offer my sincere thanks to Mitch and his team for being so generous,” Little Havens’ senior nurse Donna Ginbey told the BBC.

The donation was emotional for Winehouse‘s parents.

“Amy would be pleased because she loved children and I know she’s fully behind us in all the work we are doing,” father Mitch Winehouse said. The Winehouses first got to know the organization after visiting the Hospice in early October.

“The staff, the kids and their parents, plus parents who had just lost their children, were all concerned about us and were comforting us. So we’re very grateful to them,” he said.

Winehouse passed away in July at age 27 from alcohol poisoning. Soon after, the Winehouse family announced the foundation to help people — especially children and addicts.

“I was with my cousin Michael when I heard and straight away I said I wanted an Amy Winehouse Foundation, something to help the things she loved — children, horses, but also to help those struggling with substance abuse,” Mitch said shortly after her death.

The Foundation’s money is coming from music royalties and auctions of Winehouse’s personal wardrobe.

“What’s going to happen is that we’re putting that [song “Body and Soul”] out ahead of the album,” singer Tony Bennett told MTV of the pair’s duet. The money — he added — would go to charity.

“And it’s going to a foundation that her father started — to teach all the young children not to take drugs and all the royalties of the record will go to that.”

The Foundation almost didn’t happen — a cyber squatter took the intended domain name and tried to sell it back to them at a hefty markup.

“At moment someone else has registered an Amy Winehouse foundation,” he tweeted in September. “We will get the name back but it is time consuming. In the meantime, keep playing Amys music and think about her.”

“We all have to bombard the tabloids websites to put pressure on this s**thead who stole our foundation name… Instead of concentrating on allocating funding I am having to send cheques back cos [sic] we don’t haven’t got bank ac in that name.”

“Our solicitors are all over this, but it takes time. Meanwhile we can’t get on with foundation,” he added.

Eventually, The Amy Winehouse Foundation won the battle. “It seems we have got our foundation back,” Mitch added a few days later.

“This person was offering to sell name on website. We have got this withdrawn… He was also trying to get in touch with Blake to set up the foundation. Blake? Can you imagine?” Winehouse wrote.

52 mins ago
by Giovana Gelhoren