Drew Ryniewicz will keep her head up after encouraging words from Justin Bieber. Meeting Stevie Wonder helps, too. 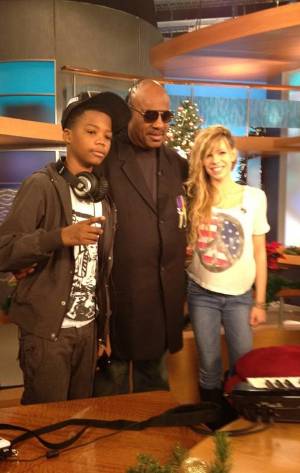 X Factor castoff Drew Ryniewicz is learning that defeat can sometimes have its perks.

In Ryniewicz’s case, it’s learning that not only is your idol Justin Bieber a fan, but he’s become vocally active in stating the case for the 14-year-old who was eliminated from The X Factor Thursday night.

“Keep your head up. I lost my first competition too. this is just the beginning for u. never say never. best wishes,” tweeted Bieber after Thursday’s episode.

Drew, from Chino Valley, Arizona, seems to be taking her ouster from the final five in stride.

“Sometimes life isn’t fair. Sometimes people make mistakes. I wish I could still be performing for you guys on that stage,” tweeted the singer later Friday morning.

The day after her elimination was a busy one.

Simon is responsible for Drew’s exit >>

The elimination of Drew has stirred interest in The X Factor. The bubbly youngster has a mature, Carly Simon-ish singing style that belies her youth. However, a performance of Michael Jackson’s “Billie Jean” prompted her exit.

“I shouldn’t have chosen that song,” said Simon Cowell on the show Thursday night. “It was too slow. I should have listened to the others and I’m begging these two (judges) to give her a chance.”

In any instance, her departure has certainly raised her profile — and her Twitter followers.

“100k woooooooooohooooooo thanks so much,” twitted Drew Friday afternoon after passing the 100,000 mark for Twitter followers.