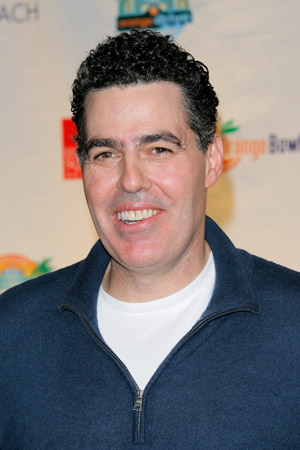 It’s safe to say that comedian Adam Carolla won’t be trekking his tent down to any Occupy Wall Street protests anytime soon. The former star of Loveline went off on the 99 percent generation in a profanity-heavy interview with the Media Research Center.

His assessment: The protestors are nothing but a bunch of whiny “a** douches” who were coddled their whole lives.

“There’s something that’s come up in this country that didn’t use to exist, which is envy. And it’s a big issue,” Carolla said in the sit-down. “It was understood back in the day and we are empowering, we’re now dealing with the first wave of participation trophy, my own fecal matter doesn’t stink, empowered, I feel so f**king good about myself, everyone’s a winner, there’s no losers, we’re dealing with the first wave of those f**king a**holes.”

“[Protesters are] self-entitled pricks who think the world owes them a living,” Carolla added. “But then you get out into the real world and you realize, ‘I’m a f**king loser. They’re feeling shame. They’ve been shamed by life because they haven’t been prepared for life. They’ve had so much smoke blown up their collective a**es, by the time they get out in the real world and the realize the real world doesn’t give a f**k where you’re from or what your mommy said you were or how pretty you are.”

Oh, he wasn’t done there, not by a long shot.

“We’ve created a bunch of f**king self-entitled monsters,” the father-of-two snarked. “‘I want my Most Valuable Player trophy.’ ‘Well, you’re the slowest, fattest guy on the team.’ ‘Why should he get one and I don’t get one?’ ‘Because he busts his ass and he runs a 4.4 40. That’s why he gets one.’ ‘Well, this is bulls**t.’ And then everyone gets involved and everyone gives everyone a participation trophy and then everyone feels good about themselves but it’s not based on anything.”

He blames the Millennial generation’s parents — the Baby Boomers — for employing Dr. Spock’s mentality that everyone’s opinions and feelings matter.

“You should feel good about yourself because of your accomplishments. Not because somebody yelled at you to feel good about yourself,” the former host of The Man Show said. “When these folks become adults and enter the workplace, they’ve done stories on this, on how you can’t treat them. The boss can’t yell ‘Hey, let’s go. Let’s get back to work.’ ‘Oh, you’ve raised your voice to me. You better watch your tone, buddy. My dad’s a lawyer, he’ll sue your ass, I’ll take this company.'”

Wow, tell us how you really feel, Adam! Maybe he should get together with former Saturday Night Live star Victoria Jackson and complain.

Do you agree with Adam Carolla’s assessment?