Kanye West says his Grammy snub is his own fault — but not for the humble reasons you may think. Yeezy explains. 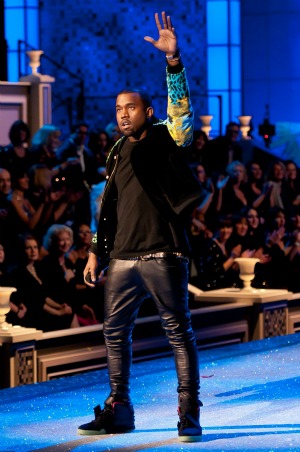 Kanye West humble? We don’t think so. What starts out sounding like a mea culpa in the face of his Grammy Award nomination snub turns into the usual Kanye-ism.

While West was nominated for a ton of Grammy awards, an Album of the Year nom remained elusive. The controversial artist says it’s his own fault — because he released two awesome albums in the same year. The Grammy judges simply couldn’t decide which one to honor!

“Something I figured out earlier today, because you know everybody came to me last night like, ‘Congratulations,’ because you know I’m leading — I have the most Grammy nominations once again, like we always do at this time,” said the never meek West to the crowd at a tour stop in Chicago Thursday night.

“But, you know, people focus, they say, ‘You ain’t have Album of the Year or Record of the Year.'”

“I figured it out, though. That’s my fault for dropping Watch the Throne and Dark Fantasy the same year. I should’ve just spaced it out, just a little bit more.”

Kanye West and other stars with foot-in-mouth syndrome >>

Yeezy has a treat for fans, though — a new behind-the-scenes look at his Watch the Throne tour with Jay-Z. You’ll have to pay a fee to VoyR to watch it, but we can preview some of West’s commentary here.

“I always joked that I was like — OK, I’m doing music, but there is a bigger plan for me at a certain point,” West says at the start of the clip. “I wasn’t given this power for no reason and now it’s starting to open up.”

“I wanna know when I’m gone that they’ll be 10 people that will go up and grab that mic,” West said of his legacy. “I wanna know that there are warriors now.”