Mattel has created a one-of-a-kind Barbie inspired by hip hop star Nicki Minaj. The doll includes “every signature detail, right down to the tattoo on Nicki’s left arm.” And more importantly, proceeds generated from its sale will go straight to charity. 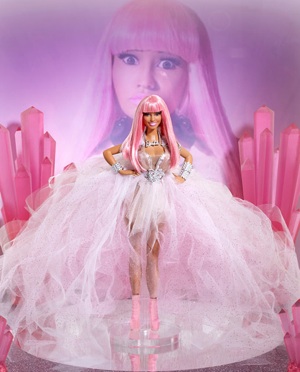 One of Nicki Minaj‘s biggest dreams has come true: She’s a Barbie! The rapper is known for her obsession with the toy icon and fully supporting the Barbie lifestyle. It was only a matter of time before Minaj and Mattel joined forces.

Mattel has produced a one-of-a-kind Barbie modeled off the award-winning star. According to Billboard, the doll will be auctioned off on CharityBuzz.com and showcased at Divine Design’s five-day event and gala at the Beverly Hilton in Los Angeles. Bids start at $1,000 with all proceeds going to Project Angel Food, which provides food for families affected by HIV and AIDS.

Stefani Yocky, a Barbie spokeswoman said, “Barbie is obviously a pop culture icon. She’s been in the spotlight for over 50 years and strikes that chord with girls of all ages in terms of being representative of the times. And Nicki is a big part of pop culture and also huge within the fashion industry, as well as a big Barbie fan. It’s really exciting for us that she’s been so generous to allow us to create this one-of-a-kind doll to support such an important cause.”

TMZ reports that pop star Katy Perry will also have a Barbie made in her image. Like Minaj, hers will be an original produced exclusively by the toy company. Other celebrities who’ve modeled for the brand include Carol Channing, Rachel Zoe and Janet Jackson. CharityBuzz will be accepting Barbie bids through Dec. 19, just in time for the holidays.

On the music front, Minaj was recently nominated for three Grammys, including Best New Artist. She also announced the title of her sophomore album, Pink Friday: Roman Reloaded, which is scheduled for release on Valentine’s Day.