Award-winning country star Taylor Swift will debut a very sophisticated update to her signature locks as the guest of honor at Friday’s Billboard Women in Music Awards. 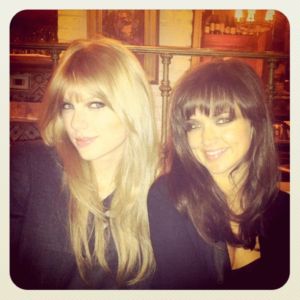 A new look for Swifty!

Singing star Taylor Swift will debut a very different look when she accepts her Woman of the Year prize at Billboard’s Women in Music event in New York City Friday afternoon.

The “Love Story” hit maker has swapped her signature curly blonde tresses for blunt bangs and a sophisticated blowout.

“Got a haircut,” the country superstar tweeted Thursday morning, attaching a snapshot of her mane makeover.

The new look comes on the heels of a snub from the Recording Academy at Wednesday night’s live Grammy nominations ceremony.

Taylor’s latest album, Speak Now, has sold over 3.6 million copies since its release last fall, but she was shut out of contention for the show’s three biggest prizes: Album of the Year, Record of the Year and Song of the Year.

Instead, Swift’s been crowned Billboard’s Woman of the Year.

Billboard’s annual Women in Music Event celebrates the most powerful and talented women in the music business, coinciding with the publication of the Women in Music Power Players list.

The singer-songwriter, 21, behind the blockbuster album Fearless is the youngest artist to ever receive the honor. She succeeds previous Woman of the Year recipients Reba McEntire, Beyonce and Fergie.

The Woman of the Year gong is the latest honor for Swift — who became the youngest person to win the Best Album Grammy for Fearless in 2010. She’s won a host of accolades from the Country Music Association (CMA) and the American Music Awards (AMA) and was the bestselling artist in the industry between October 2010 and October 2011.