More than a year after his wedding to singer Katy Perry, a “happily married” Russell Brand is starting to think about babies. On Friday’s Ellen, the British comedian and actor confesses that he longs to hear the pitter-patter of little feet. 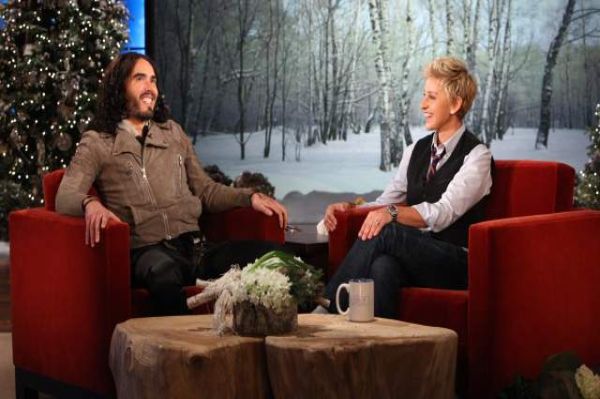 British comedian/actor Russell Brand appears on The Ellen DeGeneres Show Friday and reveals that he longs to start a family with his pop star wife Katy Perry.

The couple first met during Russ’ hosting gig at the 2009 MTV Video Music Awards. They got married 13 months ago.

“Katy says you are going to try and start a family. Are you going to have a family?” Ellen asked.

“I would like one. I love those little babies in the beginning,” Russell replied.

“Yeah, that’s how they start out,” Ellen chimed in.

“They’re so lovely in that bit. Me and Katy are godparents to two twin boys. They’re called Sam and Donovan,” the Arthur star volunteered.

Katy’s publicly declared her love of booze as the reason for the delay in baby plans. But Sam and Donovan have given Russell, 36, a new-found fascination with tots.

“At first they were boring. They were just essentially little fluid factories, generating fluids — no regard for what I was wearing,” he said. “Now, they are interesting. They smile and look at me and wonder… I’m just observing them like I’m a scientist.”

Russell also hit back at the rampant rumors of contention in his relationship with Katy. On Wednesday, several reputable news outlets reported that The Brands were calling it quits.

The latest in a series of split whispers spread across the web when a phantom user, linked to an “unverified” Twitter account, posted a tweet announcing that Katy had filed a petition to end her marriage to Russell.

Brand says the pair are actually quite happy together.

“There are always rumors aren’t there?” he laughed. “In the end you have to just not engage with Internet technology, which is difficult because a lot of the nude women websites I quite enjoy. But they’ve had to go. I’ve treated the whole Internet now like it’s a wicked little liar. Yeah, I am really happily married.”

Katy, 27, addressed this week’s divorce stories in a tweet:

“First I’m pregnant & then I’m divorced. What am I All My Children?!…” the “Hot ‘N Cold” singer wrote on her Twitter feed Thursday.

Katy and Russell are shaking off the breakup rumors by getting inked as a couple. They’ve released pics of a recent date they took to a tattoo parlor in an effort to prove they’re still in love.

After all, what could cement a relationship more than a synchronized inking session?