Tori Spelling and Dean McDermott welcomed their third child in October and they are already planning on number four! 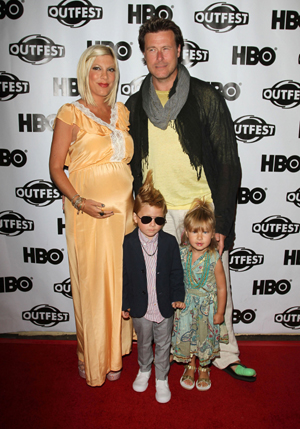 Tori Spelling welcomed her third child, Hattie, in October — and she and husband Dean McDermott still have baby fever!

“I think we’ll have a fourth,” McDermott told Access Hollywood on Tuesday. He revealed that as soon as the pregnancy test was positive with Hattie, they were already planning their fourth.

“As soon as I saw it was positive and it was a pregnancy, we both thought we need to have a fourth — at the same time,” he said.

In addition to baby Hattie, they are also parents to 4-year-old Liam and 3-year-old Stella. McDermott also has a 13-year-old son, Jack, from a previous marriage.

Spelling added that she will probably draw the line at four. “I’m 38,” she said. “I’m not gonna be able to have that many more.”

“Once we have a fourth, I think that’s really kind of decision time whether to shut it down,” McDermott said, doing a snip motion, indicating he was planning a vasectomy.

It sounds like the couple, who just premiered a new season of Tori & Dean: Home Sweet Hollywood on Oxygen, has the right mind-set for four kids.

Dean agreed, saying, “You lost your mind after the second one, so… the third, fourth and fifth, it’s like you’re so far gone, it’s just kind of the same.”

Spelling does admit, however, that each pregnancy has been a little more difficult than the first. “People always think the first one was the hardest. But I’m like, ‘No the first one was easy for me because I could lay around all day. I didn’t have two little ones to take care of,'” she said.