Is it wrong to want to rub your hands all over a guy’s head — ummm, and his abs — when you first set eyes on him? Because that’s how we feel about hottie Taye Diggs. Not to mention that when he wears his eyeglasses, our insides melt like butter. Put a lab coat on him in his recurring role on Private Practice, and he’s every woman’s doctor fantasy come to life. Doctor, we think it’s time for our checkup! 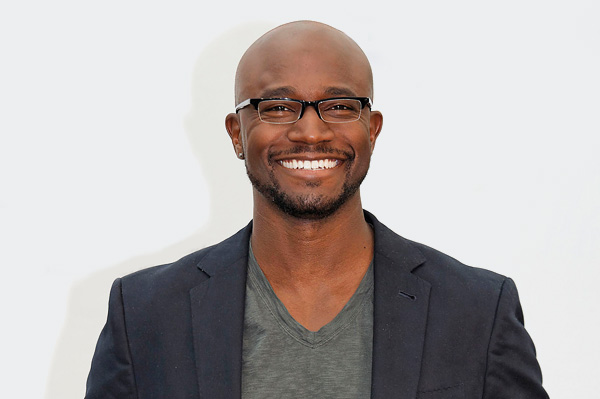 He’s a singing sensation, a dashing TV doctor and a Broadway-musical maven — oh, and a heckuva hottie. Taye Diggs’s fine physique makes it pretty much impossible to forget that last one, not that we’d ever want to try! 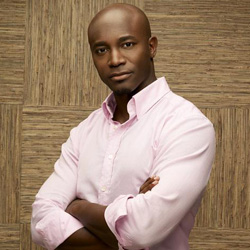 With his flawless skin, perfect smile and calm sensuality that draws you in, Taye, one of People‘s Sexiest Men Alive in 2007, makes for one smooth operator. It’s that suave-and-sexy vibe that has shaped the role of Dr. Sam Bennett on Private Practice — and made us wish that this M.D. would show up when we get our yearly physical.

What’s one of the things Taye loves about his current job on PP? Bringing the funny! “For me, the most fun has been the comedic predicaments that the writers and [creator/head writer/producer] Shonda [Rimes] have had me deal with: Not knowing how to ride a bike and being awkward in all of my dating situations, being awkward around Naomi, being awkward around sex. You know, all of that stuff I just love,” he told MovieWeb.com about season three of the show. “I’m a huge fan of comedy, and whenever I get the opportunity to be funny, I’m all for it.”

We’d be remiss if we neglected to mention his drool-worthy performance as Ally’s roommate’s beau, lawyer Jackson Duper, in TV’s Ally McBeal. And how did Stella get her groove back? By, ahem, “getting to know” Taye, who played Winston Shakespeare in the film adaptation of Terry McMillan’s novel.

If there were ever to be a guy that could re-light your fire, it would be Taye! 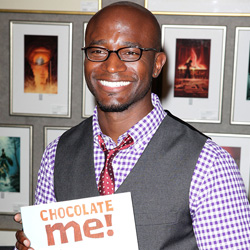 Actor, professional hottie, husband, father and author? It’s like Taye is too good to be true! But it’s not: Taye’s children’s book, Chocolate Me, about a boy who’s teased for his skin color but discovers his true inner beauty, was just published this past September.

He wrote a special column for SheKnows Parenting last week about how he bonded with his son after he was born:

“One of the first things I did after my son Walker was born was take off my shirt and hold him against me. It was such an important moment where the two of us were connecting on a very similar level. We were skin-to-skin and he could feel my heart beat. He could take in my scent, feel me breathing and hear my voice resonating. It was a special way that he and I could connect. There’s no way a father can compete with a mom’s ability to grow a baby in her womb! We’re trying to play catch-up in the way that works for us.” 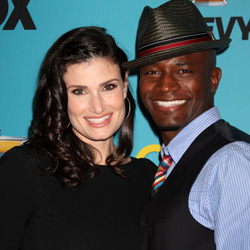 In fact, we kind of want to be Taye’s wife Idina Menzel — for her talent and, of course, her claim to Taye-Taye! The pair met while performing as part of the original cast of the Tony Award–winning musical Rent on Broadway (he as landlord Benny, she as performance artist Maureen). Since then (among many other accomplishments), she’s won a Tony for her performance as Elphaba in the musical Wicked, and has a recurring role as the biological mother of Rachel (Lea Michele) on Glee.

And after all these years, he knows the perfect gift to give her: time! “My definition of romance is… after you’ve been together for so long and had kids, you’ve done all the stereotypical romantic stuff — chocolate and flowers,” he told Good Housekeeping. “It becomes what’s valuable to the other person in that moment, which for my wife is giving her a break — like, by handling bath time.”

We love it when a man takes charge (and we reap the benefits)!

Taye married wife Idina Menzel on Jan. 11, 2003, and the pair’s baby boy, Walker Nathaniel Diggs, was born on Sept. 2, 2009. Will the two co-star again together in the future? Maybe! Menzel told Zap2it she’d be more than eager to work with him on Glee: “He would love that. I’m always sort of subtly lobbying for that to happen.” Awww, we can’t get enough of these lovebirds!