Amber Rose’s debut album is in the works! Here she describes what fans can expect, and what role boyfriend Wiz Khalifa is playing in the process. 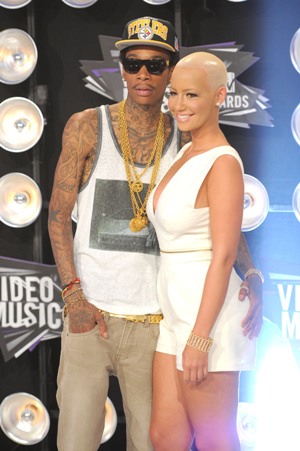 Amber Rose‘s album is headed our way, thanks in no small part to her love, rapper Wiz Khalifa. The model recently spoke to The Juice about her upcoming album and a few other projects she has in the works.

“I’m still in the beginning stages of it right now,” Amber Rose said of her debut album. “I’m working hard. I’m in the studio every single day. I’m just really inspired and motivated.”

When asked if boyfriend and future baby daddy Wiz Khalifa will be heard on any of the tracks Amber Rose replied, “Of course! Of course, that’s my daddy!” The happy lovebirds have even gone so far as to have each other’s names tattooed on their fingers.

“I brought everything to him. He’s like, ‘Baby, you have to do this. You have talent. You write all your stuff,'” she said of Wiz, whom she’s pictured here with in August at the 2011 MTV Video Music Awards. “He inspired me to do it.”

Also in progress? “I’m designing for Members Only,” Amber Rose shared, “It’s all leather, wools [and] furs.” In addition she’s keeping busy as the new spokesperson for Smirnoff Vodka, as well as appearing as a judge for season two of Master of the Mix, a reality television series based on a DJ competition.

In response to those questioning her credentials for such a position she told HipHopWired, “I don’t know how to DJ but I do know how to party, I literally get paid to travel around the world to party so that’s what I judge the DJs on.”

Are you interested in picking up Amber Rose’s debut album?