Adam Levine reveals the secret to his super sexy body. Hint: He gets in touch with his inner hippie.

Holy hotness. Maroon 5 lead singer Adam Levine revealed to Details how he gets his fit and flexible body: Yoga! 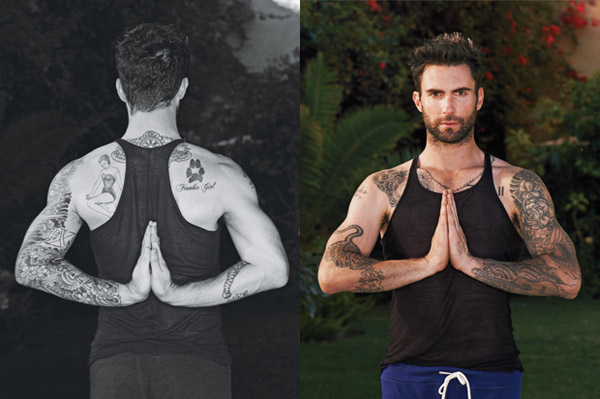 The singer and judge on The Voice turned to yoga five years ago after he noticed weight lifting and gym workouts bulked him up too much and made him sore.

“Weights made my neck thick and I would be like, ‘I’m turning into a monster!'” he joked. The singer soon turned to New York City-based yoga genius Chad Dennis for customized workouts.

“He’ll take me on a friggin’ obstacle course of yoga,” Levine said. “[It’s] an investment in happiness for the rest of my life.”

He soon enlisted Dennis to travel the world with him and customize routines for his time on the road.

“At any Maroon 5 concert, you’ll see a room backstage marked yoga,” he revealed. “Playing a show before thousands of people is a highly unnatural state. And when I get on the mat to do an hour of yoga before the show, I come out physically relaxed.”

Don’t get it twisted, though: Levine loves how it makes his body look. “I don’t like how people bullsh*t about how yoga is not about vanity.”

Dennis gives the singer customized workouts based on five different types of yoga, according to Details.

Ashtanga: The basis of Levine’s routine, this relatively high-speed style relies on a set sequence of poses and emphasizes continuous movements in between. May be too much for the beginner.

Vinyasa: A less intense version of Ashtanga, this focuses on synchronizing the breath with the movements that connect the poses.

Jivamukti: Combines a movement with music and Hindu spirituality. Levine steers clear of the dogma but is into the music and the physical flow.

Iyengar: A slow-moving style that is based on poses precisely held, often for extended periods of time. Dennis has created his own higher-energy version.

Levine plans to practice yoga for the rest of his life to maintain his physical and spiritual well-being.

“Yoga takes what you have and molds and sculpts it, which is a much more natural way to look and feel,” he said.

Watch Adam Levine get his yoga on

Pretty sure we need to get our guys on board with yoga, stat!