Disney has released a new trailer for Andrew Stanton’s John Carter. The movie is filled with hostile creatures, alien races and Martian politics. Can Carter escape captivity and find his way home? 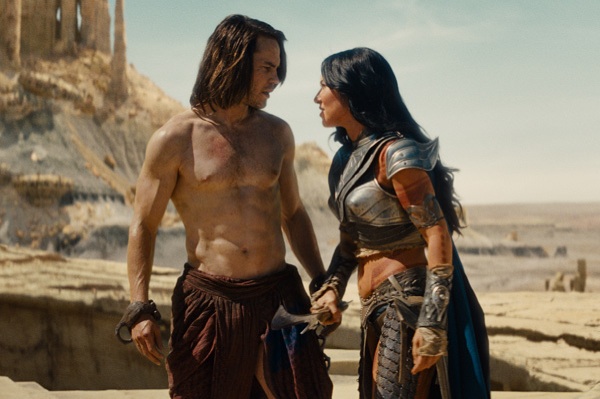 John Carter is based on the original books by author Edgar Rice Burroughs. Carter is a former Civil War veteran who’s transported from earth to the red surface of Mars. Unlike the teaser, this trailer shows more action and better graphics. It gives viewers a clear idea of what Carter’s adventure will entail.

Stanton recently spoke to Entertainment Weekly and broke down the different characters who briefly appear in the trailer. In the opening, there’s a scene where Carter is thrown into a gladiator pit alongside a tall, green creature. Stanton revealed the alien as “…Tars Tarkas [played by Willem Dafoe] and he is the leader of the green-men tribe of Tharks.” He explained, “He’s their Jeddak, which is the Martian term for ‘king’ or ‘leader.’ [But] there have been complications for the guy.”

Carter definitely feels like a fish out of water, but he’s not the only human on Mars. According to Stanton, “The other [main] species on Mars are the red men. They look like us, and they are called red men because they are of darker, copper complexion, but mainly they are covered in red tattoos. It’s just their culture.”

Carter comes across more than his fair share of red people, including his love interest Dejah Thoris (Lynn Collins). She’s a beautiful princess, who’s also a woman of science. She sees Carter as a potential savior for her and her planet. The film is somewhat of a reunion for Kitsch and Collins, who previously co-starred in X-Men Origins: Wolverine. He appeared as Remy LeBeau (Gambit), while she played Hugh Jackman‘s girlfriend Kayla Silverfox.

Watch the full trailer for John Carter below: