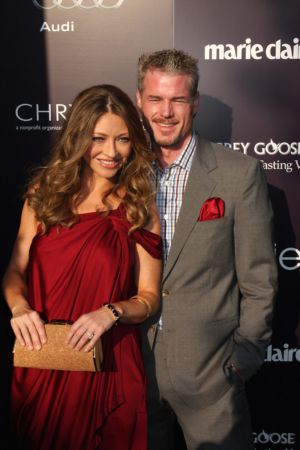 Who says it’s always sunny in Southern California? Tell that to the giant tree that just tried to take out Dr. McSteamy!

High winds blew through the City of Angels on Wednesday night, causing mass power outages and extensive property damage to many Los Angeles residents. Grey’s Anatomy actor Eric Dane and his pregnant wife Rebecca Gayheart were among the victims.

A 30-foot tall Eucalyptus tree was uprooted by strong winds and crashed through a wall of the couple’s Beverly Hills estate, according to the city’s local CBS affiliate. One witness told CBS 2 News that he saw sparks of electricity coming through a bedroom wall at the Dane/Gayheart estate after hearing a loud crash.

“She’s good now,” says Erin Smith, who lives near the recently-rehabbed TV star and the former Noxzema Girl. “No one was hurt, thank God.”

Eric and Rebecca are just one of thousands of families impacted by the freaky weather pattern. SoCal Edison Electricity says approximately 14,000 of its customers experienced power outages last night.

Power was knocked out at Sony Pictures Studios in Culver City, where employees were forced to evacuate the building through dark stairwells. The lights also went out at the bustling Los Angeles International Airport — flights and road traffic were halted for about an hour after the power went out in the passenger terminals and on surrounding roads.

Reps for Dane and Gayheart haven’t commented on the accident.