Glee producers are in discussions to bring singer Gloria Estefan to the musical-comedy as the mother of Cheerios cheerleader Santana. Estefan may drop by McKinley High for a January episode that will feature a few of her hit singles and another Latin superstar, Ricky Martin.

Another high-profile guest star may be heading for the halls of McKinley High in the new year. We hear that ’80s hitmaker Gloria Estefan is in talks to appear as Santana’s (Naya Rivera) mother in an episode of Glee airing next month. 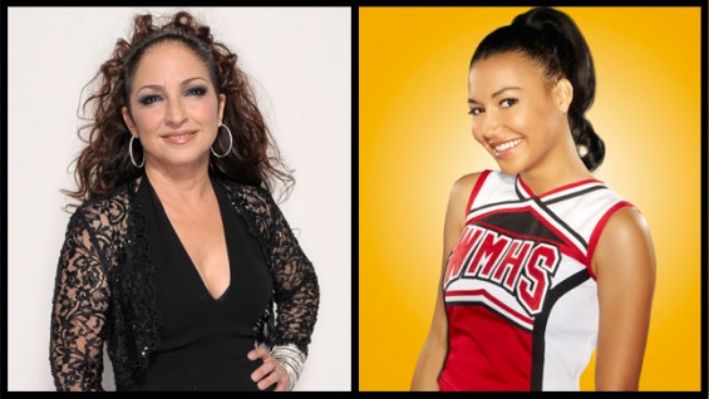 The Miami Sound Machine superstar behind chart-toppers like “Bad Boy” and “1,2,3” is working out a deal to play the mom of the Cheerios cheerleader who came out as a lesbian on Tuesday’s episode of the award-winning musical-comedy. Estefan will likely appear in the same episode as another Latin music star — Ricky Martin, who is chatting with producers about playing McKinley’s new singing Spanish teacher. The January episode might even feature some of Estefan’s old tunes, The Hollywood Reporter dishes.

The deal means that Gloria could join Idina Menzel (Vocal Adrenaline coach Shelby Corcoran, a.k.a. Rachel Berry’s mom) as the latest parental unit of a Gleekster to appear onscreen. Menzel’s husband, actor Taye Diggs, has long been eyed as a shoo-in for one of Rachel’s (Lea Michele) never-before-seen gay dads. Comedian David Alan Grier is also expected to drop in as Mercedes’ (Amber Riley) estranged father on a future episode.

Producers of the FOX show — now in its third season — are trying to scale back the frequency of celebrity guest appearances, but Glee co-creator Ryan Murphy maintains that meeting the characters’ parents continues to be high on the list of demands for many of the show’s devoted fans, affectionately dubbed Gleeks.

“Across the board, a huge amount of fans want to see parents. That’s not to say we’re going to heavily feature them, but I think it’s interesting to see some of them — not all of them.”