Sometimes the punch lines just write themselves. Courtney Love has appointed herself Lindsay Lohan’s sobriety coach. The Hole singer — widow of Nirvana frontman Kurt Cobain — had a storied history with drugs and alcohol before (sorta…not really) cleaning up her act six years ago. Now she wants to pass her “knowledge and advice” on to the troubled former child star.

Say hello to the new poster girl for healthy living. Courtney Love wants to teach five-time repeat rehabber Lindsay Lohan how to clean up her act? This sounds suspiciously like a case of the blind leading the blind. 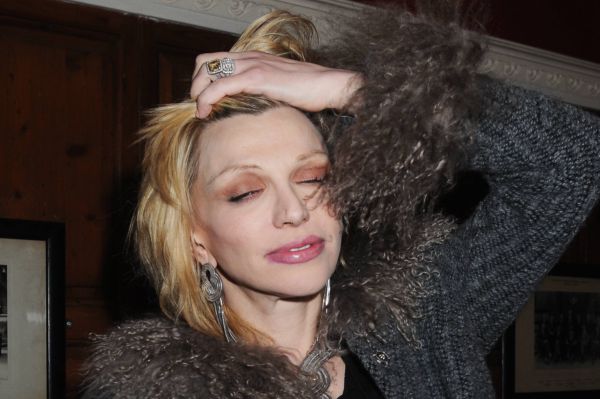 The Hole singer, 47, tells the latest issue of Details magazine that she’s helping the scandal-scarred “Mean Girl” beat her well-documented dependency on drugs and alcohol because “nobody else will.”

Ah, that it explains it then…Courtney’s the last beacon of hope! Love believes LiLo is “further down the line than I was” and even recalls an incident where she tried to educate the oft-incarcerated 25-year-old on staying clean and on the right track.

“I went up to Lindsay’s room one time and there was a show on called ‘101 Celebrity Oops’ and I am like every other one, you know — boobs out, legs everywhere, throwing s**t at Madonna, you know, whatever. I’m like ‘Lindsay, look! Drugs are bad!'”

Hmm…we aren’t sure the “Shout in Your Face” method is going to work in this case, but hey, at least the woman’s trying. After all, Courtney got help from her celebrity pals during her own battle against addiction, she confides. Actor Orlando Bloom introduced her to Buddhism and it has since become one of her strongest support systems.

“We chant every day. The 12-step program demands that you have a spiritual practice that you do daily. I love Orlando for this. He doesn’t mind being outed as a Buddhist. I don’t mind talking about it because it has changed my entire life, changed everything — restructured my body, restructured my physicality…”

According to the Courtney, she’s been sober for six years, which makes us wonder: Could Courtney possibly be the light at the end of Lindsay’s tunnel?