Before the Jonas Brothers, there was Hanson! The brothers who founded the ’90s boy band are all grown-up and breaking into the beer business. The Hansons’ newly-minted beverage brand MMMHop IPA will arrive in coolers nationwide this January.

‘Memba Hanson? Sure you do. The ’90s sibling trio that rocketed up the pop charts with their hit 1997 single “MMMBop” is back — and they’ve brought beer. 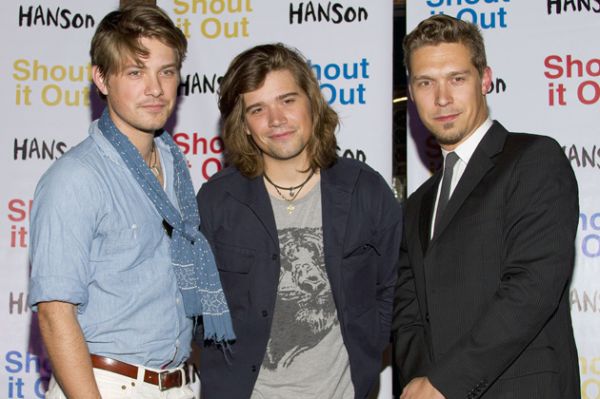 The boy banders are launching their very own brand of the bubbly beverage and it pretty much has the best name ever. Are you ready? They’re calling it MMMHop.

Named after the group’s signature song, the beer is described as an India Pale Ale which will be available for purchase early next year. The brothers discussed their foray into the alcohol industry at The Oxford Union, an Oxford University debating society meeting, earlier this week.

“It’s vital our fans trust in everything Hanson do [sic]. We are soon going to be selling our own beer. I’m not joking — MMMHop IPA anyone?” youngest brother and band drummer, Zac, told the audience.

With a little luck, the Hanson brothers — who are now married dads — could amass a mighty fortune from their latest venture. After all, there’s big money in the celebrity booze biz. Earlier this year, Bad Boy mogul Sean “Diddy” Combs unseated Forbes magazine staple Jay-Z as the “Wealthiest Artist in Hip-Hop,” thanks in large part to his interest in the popular vodka brand, Ciroc. Combs’ joint venture with the drink giant Diageo helped bring the rap star’s net fortune to $475 million, analysts say.

If Hanson’s beer is anything like their infectious number one song, this could be the best gosh darn beverage ever to hit the market… or it could just be insanely irritating. We’ll have to wait and see!