Vinny Guadagnino is sorry for an incredibly explicit rap song he released glorifying rape and says it was meant to be funny. 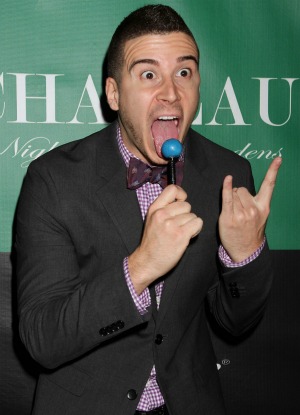 Isn’t rape hilarious? Vinny Guadagnino thinks so. The star of The Jersey Shore released a video on YouTube with his own hip-hop song featuring incredibly raw and disturbing lyrics about raping strippers — but now that it has caused an uproar he claims it was a joke.

The video, which has since been removed from the site, features Guadagnino’s song “Rack City Mix” in which he rhymes about raping a stripper while photographing the event — but not to worry, the victim can slap him with her breasts as punishment. We will spare you the full lyrics, but distasteful is putting it mildly.

Guadagnino first went on the offensive after experiencing an immediate backlash on Twitter, writing, “Whoa! Some people really know how to take things out of context ! #LearnToListenToMusic …It was fun though!”

The reality star later changed his tune, apologizing for his ill-thought foray into hip-hop.

“I’d like to apologize for the rap,” Guadagnino wrote on his blog. “Was meant to be a funny take on an already ‘dirty’ song — funny since I’m known as the ‘good boy.'”

“I am, and I am 100 percent against violence of any kind. I work with many organizations to stop violence and bullying, and will continue to. It’s something I strongly believe in. Very sorry to anyone I’ve offended.”

That’s all well and good, but the Rape, Abuse and Incest National Network (RAINN) isn’t buying it.

“While we recognize Mr. Guadagnino feels remorseful, we urge him to go a step beyond a one-off-Twitter apology,” said a RAINN spokesperson. “We ask that he take action to stand up for victims of sexual violence by connecting them with the help they deserve through the National Sexual Assault Online Hotline at rainn.org”

Tell us: Was Vinny’s rap rockin’ or repugnant?