Justin Bieber and Mariah Carey unveiled the music video for their duet, “All I Want for Christmas Is You.” Does it live up to the original?

Justin Bieber unveiled the video for his new duet with Mariah Carey during the 2011 Christmas in Rockefeller Center on Wednesday night in New York. The teenage sensation performed a couple of songs from his Under the Mistletoe album before introducing the video. 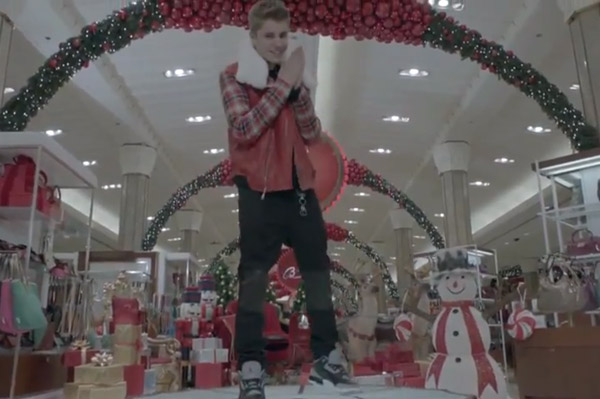 “God bless and Merry Christmas!” Bieber yelled to the thousands of fans at 30 Rock before showing the video.

The duet — a remake of Carey’s classic “All I Want for Christmas Is You” — features the newly svelte mama sporting a super short and sexy Santa Claus outfit. Bieber is his normal adorable self, complete with incessant hand rubbing atop a platform in the middle of Macy’s in Manhattan’s Herald Square.

The song itself is pretty solid — it sounds mostly like Carey’s original, with a couple of Bieber verses thrown in. His maturing voice is much easier for us to take than some of his earlier work.

The video? Eh. It’s definitely well-produced and all of the Beliebers will love it, but we were turned off by Bieber’s gawking at the 41-year-old mother of twins. Also, what is with Carey’s inability to move from her spot in front of the random wall?

Also, there was product placement — and lots of it. Maybe we’re just hyper-aware of it these days, but the straight-up plugs for Nintendo DS and Macy’s were annoying.

All in all, it’s a good Christmas song that we’ll listen to at least a few times this year. It’s only 25 days until the big day, after all!

What do you think of the video?