Alice Eve is heading toward the final frontier. She’s in talks to join the cast of the upcoming Star Trek sequel. The actress supposedly beat out Aussie Teresa Palmer and Captain America’s Hayley Atwell for her top secret role. 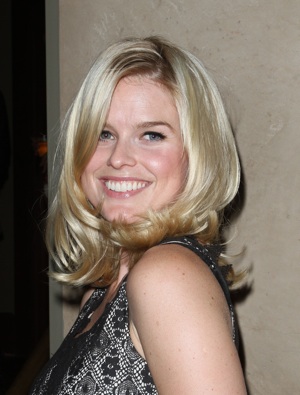 British beauty Alice Eve is going sci-fi. The actress has caught the eye of Star Trek producer and director J.J. Abrams. According to The Hollywood Reporter, Eve is in negotiations to join the sequel to the 2009 blockbuster.

Eve is best known for her work on the final season of HBO’s Entourage, as well as the films She’s Out of My League and Sex and the City 2. As for the upcoming Star Trek sequel, her character’s identity is being kept under wraps, but it’s described as a significant role. Unlike her peers, Eve’s character will be completely new to the Star Trek mythology. Her role has been specifically created for the film.

Previous to this announcement, Abrams also expressed interest in casting Benicio del Toro as the film’s villain. The majority of the cast from the previous Star Trek including Chris Pine (James Kirk) and Zachary Quinto (Mr. Spock) are expected to reprise their roles. Even though this is Eve’s first introduction to the series, she’s no stranger to sci-fi or fantasy.

In 2010, Eve was originally cast as Emma Frost in the comic book adaptation, X-Men: First Class. After occupying the role for a short time she suddenly asked to be released from her contract. According to Movieline, she departed “after script changes left her unhappy with the direction and size of the role.” The actress was eventually replaced by Mad Men star January Jones.

Eve has several major films on the horizon. Next year she’ll appear in Men in Black III (May 25) and The Raven (March 9), followed by the Star Trek sequel set for May 17, 2013.