Paulina Gretzky, daughter of hockey great Wayne Gretzky and actress Janet Jones, no longer has a Twitter account. Her sexy pics have been removed but the fuss might mean the beginning of a new starlet. 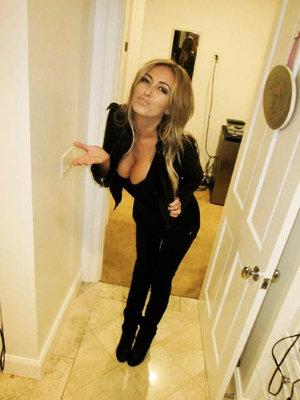 The world no longer has Paulina Gretzky on Twitter. The news is shaking up the cyber universe.

“Sad day in twitter history as the Great One Paulina Gretzky has left the twitter game,” tweeted a Paulina fan on Wednesday.

Gretzky, the daughter of hockey great Wayne Gretzky and actress Janet Jones, has deleted her racy Twitter account apparently at the urging of dad Wayne.

“Having a nice sit down dinner with my dad about social media… haha,” tweeted Paulina, 22, last week.
“Taking a break from Twitter for a bit. Happy Holidays!!! xoxo.”

After that, @PaulinaGretzky was history. What we lost were dozens of shots of Paulina in Los Angeles in various poses, from planking on a downtown mailbox and saying hello from the cockpit of a airplane to drinking in nightclubs and sunbathing. To fans’ delight, there were several of her sunbathing.

The move has surely disappointed her 24,000 Twitter followers, but the pics have gone viral, so there’s no problem finding them. The news of the account deletion was first reported by Canadian news outlets, where her dad is an icon.

Paulina first attracted attention, at least in Canada, when she sang at the 2003 Heritage Classic outdoor ice hockey game between the Edmonton Oilers and the Montreal Canadiens, according to the Edmonton Journal. After that, she landed a song, “Collecting Dust,” on MTV’s Laguna Beach and had a few credited and unaccredited acting roles, too. Paulina and her mom both appeared in the Justin Timberlake film Alpha Dog.

“OMG a new starlet is on the horizon… Move over Kourtney and Kim and say hello to Paulina Gretzky,” tweeted a fan.