Amy Winehouse’s third and possibly final studio album, Lioness: Hidden Treasures, is set to drop — just in time for the holidays! SheKnows has the rundown on Lioness, along with the Winehouse video tribute set to the album’s first track. 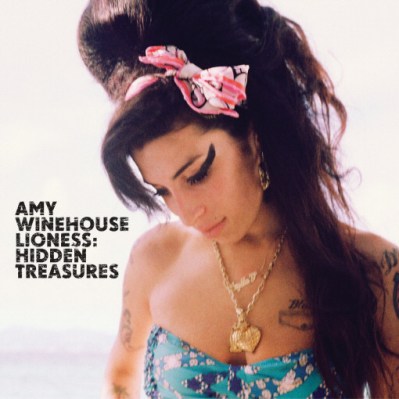 Mitch Winehouse’s biography Amy, My Daughter won’t be ready in time for the holidays, but the new Amy Winehouse album Lioness: Hidden Treasures would make a fantastic stocking stuffer this season… Then again, what Winehouse fan will be able to wait that long to unwrap this musical gift, which drops Dec. 5?

Winehouse’s first posthumous release comes four months after her untimely death and just a few days after her Back to Black dress sold for a fortune. The powerhouse’s long-time musical partners Salaam Remi and Mark Ronson scoured through recordings she’d made before, during and after the releases of Frank and Back To Black. The resulting album is a tribute to Winehouse and her extraordinary talent as a songwriter, singer and interpreter of classics.

Lioness: Hidden Treasures promises a mix of new Winehouse tracks, alternate versions of her hits and covers that will make fans remember just how amazing she was. It shares Winehouse’s infamous and tragic heartache, but also promises some lighter fare and jazzy scats, not to mention the Tony Bennett duet that was her final studio recording and a collaboration with Nas.

Here is the Amy Winehouse video tribute set to the first track on Lioness: Hidden Treasures, “Our Day Will Come,” as well as a look at the full track list, with notes about each song from the Winehouse website.

2. “Between The Cheats” — new Amy composition recorded in London in May 2008 for potential inclusion on album three. Produced by Remi.

3. “Tears Dry” — originally written by Winehouse as a ballad, this is the original version she recorded in November 2005 in Miami with Remi. The later up-tempo version appears on Back To Black.

4. “Wake Up Alone” — the first song recorded for the Back To Black sessions. This is the one-take demo recorded in March 2006 by Paul O’Duffy.

5. “Will You Still Love Me Tomorrow” — Winehouse’s beautiful reading of the Carole King-written Shirelles’ classic. Produced by Mark Ronson and featuring the Dap-Kings with string arrangements by Chris Elliott, who did all the strings for Ronson’s tracks on Back To Black. Recorded in September 2004.

6. “Valerie” — one of Winehouse’s jukebox favorites. This is the original, slower tempo version of the Mark Ronson-produced, post Back To Black single. Recorded in December 2006.

7. “Like Smoke” featuring NAS — Amy and Nas became really good friends after Winehouse name-checked the New York rapper on Back To Black‘s “Me & Mr. Jones.” “Like Smoke” is finally Winehouse doing a song with one of her favorite artists. Produced by Salaam Remi. Recorded in May 2008.

8. “The Girl From Ipanema” — the first song the 18-year-old Winehouse sang when she first went to Miami to record with Salaam. Salaam remarked that “the way she reinterpreted this bossa nova classic made me realize that I was dealing with a very special talent. Her approach to the song was so young and fresh, it really inspired the rest of our sessions.” Recorded in May 2002.

9. “Halftime” — Winehouse had talked to Ahmir ‘Questlove’ Thompson of the Roots about working together. “Halftime” is a song that Winehouse and Remi had worked on since the Frank sessions. The result is beautiful. Recorded in August 2002.

12. “A Song For You” — heartbreaking and emotional version of the Leon Russell classic made famous by Donny Hathaway. Hathaway was Winehouse’s all-time favorite artist and the song was recorded in one take, just Winehouse and her guitar, at her home in London during the spring of 2009 as she battled her demons. Produced by Remi.