Mario Lopez is getting into the men’s undergarment business with a new partnership with Fresh Pair underwear. Show us what you’ve got, Mario! 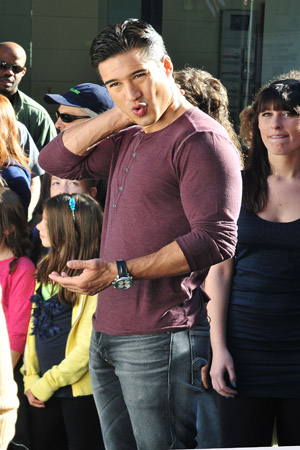 Have you ever dreamed of getting into the (likely really sexy) drawers of Extra’s Mario Lopez? So have we.

Well, men will get their chance — the former Saved By the Bell star is launching his own line of men’s underwear — called Rated M — on Thursday in partnership with underwear retailer Fresh Pair.

Not much else is available on what the Lopez underwear will look like, but we’ll keep our eyes locked on the website and let you know whenever we find out more. Call it an early Christmas present!

If he wasn’t already adorable enough, the father of one-year-old Gia regularly spends his time volunteering for various organizations, including the Boys and Girls Club.

“I’m proud to say that I’m in their Hall of Fame as an alum and I’m also the Fitness Ambassador. It’s meant the world to me because I grew up in the club,” he tells Parade in a new interview.

“When I was growing up, both of my parents worked, so it was a great place to be. It exposed me to wrestling and the arts and it just helped me stay out of trouble because it wasn’t exactly the most upscale neighborhood where I grew up. Now, I’m able to give back and give my time,” he added. “It kept me in the right road when I was a kid. And being blessed with great parents and strong sense of family helped prepare me for fatherhood.”

Read on for more Mario Lopez