Katy Perry divorcing Rusty Rockets? Say it ain’t so! The card-carrying “California Gurl” and her British beau Russell Brand have fallen victim to a Twitter hoax, which duped a host of reputable websites into believing that the couple was headed for Splitsville. 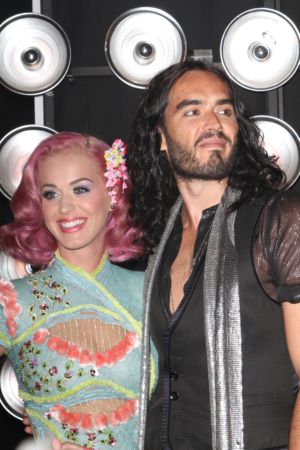 Are Katy Perry and Russell Brand throwing in the towel just a year after exchanging their vows?

A British journalist has stepped forward to put the kibosh on a rumor heating up the Twitter universe as we speak. Fans and gossip gawkers were duped into believing that the pop star and the comedian — who fell in love and tied the knot after meeting at the 2009 MTV Video Music Awards — had announced plans to divorce after a bogus Twitter profile posted a tweet saying just that.

The Katy-Russell divorce scoop took flight online this morning when the rogue message was re-tweeted multiple times and eventually picked up by the press in Brand’s native UK, says Dan Wootton, celebrity informant for Britain’s Now.

“Can’t believe all the journalists who were sucked in by a fake ?Twitter profile claiming Katy Perry had filed for divorce from Russell ?Brand,'” Dan wrote on his own Twitter feed this afternoon.

Word around the watercooler has it that even TMZ — the website with the distinction of being the world’s first news entity to report the death of Michael Jackson — unwittingly hopped on the phony scoop. Editors quickly removed an article about the nonexistent divorce announcement after Russell issued a statement to The Daily Mirror insisting that his marriage to the “Waking Up in Vegas” singer remains intact. TMZ honcho Harvey Levin, however, denies falling prey to the Twitter hoax.

Russell, 36, and Katy, 27, married in October 2010 and the union has been plagued by whispers that it’s teetering on the rocks ever since. In April, Perry filed suit against the publishers of the Australian tabloid New Weekly (NW) after the magazine published what it billed as an exclusive interview with a woman named Angela Summers. The alleged ex-pal of Perry’s accused the married songstress of secretly bedding songwriter/producer Benny Blanco behind Russell’s back.

In a tell-all chat with NW, Summers claimed that Katy had developed an inappropriate relationship with Benny, who famously produced remixed versions of her hits “I Kissed a Girl” and “Hot N Cold.” Summers even reported witnessing Katy and Benny share a passionate kiss while working late at the studio. Not only did Katy deny cheating on her husband, she said she hadn’t the faintest idea who Angela was.

“Katy has grown closer and closer to Benny Blanco over the last year,” Angela said. “Katy loves to flirt with everybody, but when she’s around Benny she gets extra flirty and only has eyes for him. She told me that she loves the fact he makes time for her whenever she needs him.”

The most recent rumors of strife in the 13-month marriage came last week, when loose-lipped spy-witnesses told The Day that Katy and Russell regularly bicker about everything and reported that Russell’s been seen cozying up to a British comedienne pal who lives near his home in Los Angeles.

“They’re rowing about pretty much everything. They can’t agree over when to start a family, where to live or even what to do at the weekend. They were such a passionate couple to start with, but now it seems that’s petered out and they’re not sure what they’re left with.”

Katy’s publicly declared her love of booze as the reason for the delayed baby plans. (As if a red-hot career and being a newlywed only in her twenties aren’t valid reasons enough.) She’s been careful, however, to keep mum on the rumored trouble in her romance with Brand.

Do you think Katy and Russell’s love can survive life under the microscope?