Beyonce has given us a new clue to her due date. Is the star expecting a Christmas miracle? 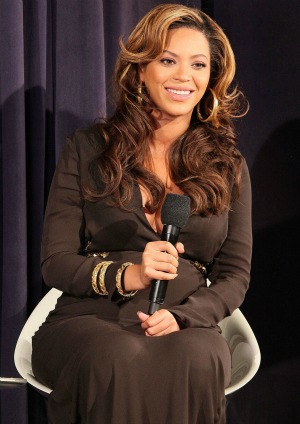 Despite the case of the mysteriously folding baby bump, Beyonce is definitely pregnant she says — and in a new video just posted on YouTube she even gives a clue to her real due date!

In the video, Beyonce is holding up a copy of the New York Daily News featuring her — and her baby bump — on the cover.

“Oh, baby! Oh, baby!” she said, dressed in costume for her music video for the song “Countdown.”

“This was on the cover of the Daily News. Right now I’m actually shooting the video of Countdown,” she told fans, “and I am six months pregnant, pretending that my stomach is flat in body suits, ha-ha-ha!”

What is Jay-Z’s big parenting paranoia? >>

“But thank god you can’t really tell from the front, but when I turn to the side… Oh baby, oh baby,” she said.

So what’s this about a Christmas baby? The video was shot on Sept. 23, 2011 and in it Beyonce specifically says she is six months along — making December nine months. Could Santa have a very special delivery for Beyonce and Jay-Z? Only time — and whatever lucrative magazine cover deal they’ve likely already set up — will tell.

Beyonce revealed her pregnancy in a stunning surprise performance at the 2011 MTV Video Music Awards by ripping open her jacket and exclaiming to the crowd, “I want you to feel the love growing inside me!”

See Beyonce talk about her pregnancy: