A little salsa is headed is to the halls of McKinley High — and we aren’t taking about dip! Singing star Ricky Martin is in chats with Glee producers and the odds are good that he’ll guest star as a substitute Spanish teacher in an episode of the award-winning musical comedy that will air in January. 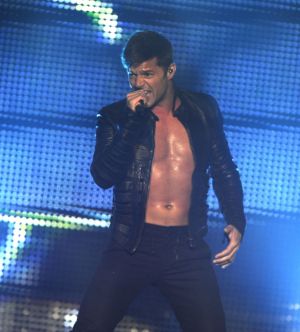 Bon bon-shaking pop hunk Ricky Martin is in talks to guest star as a singing Spanish teacher on an upcoming episode of the FOX musical comedy Glee, according to new reports.

TV Line cites production insiders who say Ricky is hashing out a deal to appear in an episode of the Emmy Award-winning show set to air in January. His role? “The hottest Spanish teacher ever in the history of Ohio,” an informant squeals. Per the deal, Martin will take part in two big musical numbers. It’s not yet known which two songs Ricky’ll be belting out, but they’ll almost certainly be something with plenty of Latin spice and opportunities for hip-shaking. (We wouldn’t have it any other way…)

Martin, former star of the ’80s Latin boy band Menudo, is best known for his pop tracks — like “Livin’ la Vida Loca” and “She Bangs,” both of which shot up the Billboard Hot 100 in the early 2000s. He hasn’t had an acting gig since a stint on the ABC sudster General Hospital in the ’90s — but that’ll soon change. Ricky’s expected to star in the first Broadway revival of Andrew Lloyd Webber’s Evita since the production opened on the Great White Way in 1979. Ricky — who first appeared on Broadway in Les Misérables back in 1999 — has been cast as Che in the show, which opens at the Marquis Theater in Manhattan on March 12, 2012.

“We’re not going to do guest stars at all the first half of the season, but I would love to work with Anne and she supposedly has the whole thing mapped out. I’m curious as to what she wants to do. I love her. I think she’s great,” Murphy said earlier this year.