Just two weeks after announcing her plans to divorce Ashton Kutcher, Demi Moore was spotted having an intimate dinner with a man. Is newly single Demi dating again? 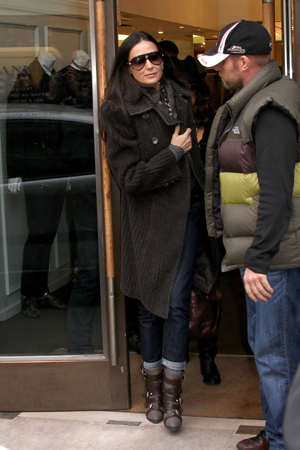 Demi Moore has been laying low since she announced her plans two weeks ago to divorce Ashton Kutcher, even skipping out on her daughter Tallulah’s debutante ball in Paris on Saturday. The 49-year-old actress, who has been looking thin and frail since Kutcher’s publicized affair, was spotted for the first time on Saturday having dinner at the Sunset Tower with a mystery man.

Is Demi finally dating again? “Demi looked good and like she was ready to be seen out,” a source tells New York Post’s Page Six. “She was in deep conversation with her male companion.”

This dinner date could have been just what Demi needed to boost her spirits, as insiders reveal that she “seemed fine, in a good mood and laughing.”

“She was just with her friend having a nice night out,” the source says.

So who is this mystery gentlemen? Us Weekly is reporting it is Hollywood florist Eric Buterbaugh. “They are BFF’s,” the insider says. “Totally platonic friends.”

This isn’t the first time Buterbaugh was spotted with Demi. He went camping with the actress and Kutcher in October when the couple was working on their relationship after the Sara Leal affair became public.

Besides Buterbaugh, Demi is also reportedly leaning on fellow Kabbalah follower Madonna to get her through this tough period. “She is calling Demi almost every day and sends her messages telling her to be proud of her strength and to know that she fought to make her marriage work,” one source says. “Madonna has had many younger boyfriends so she understands their mindset. She has told Demi that Ashton’s immaturity is evident and that she deserves someone who will fulfill her intellectually and emotionally.”