Tracy Morgan would really like it if T.I. would stay quiet about the gay jokes that almost cost him his career.

Tracy Morgan is trying to distance himself from the controversial comments he made about homosexual people earlier this year. Then, rapper T.I. goes and brings it up again in a new interview with Vibe. 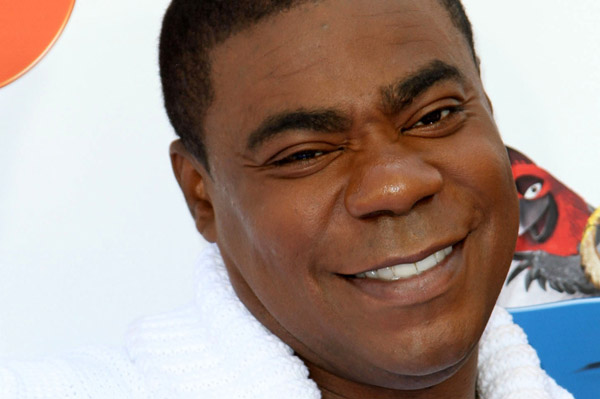 “Man, I will say this, the funniest joke I ever heard Tracy say during a stand-up was, ‘C’mon man, I think gay people are too sensitive. If you can take a d*ck, you can take a joke.’ [Cracks up laughing.] That sh*t was funny to me. And it’s kind of true,” the now jail-free rapper told the magazine.

“Tracy wishes T.I. would just shut up,” a source told the Huffington Post. “It has not only picked the scab off a very ugly wound, it has also put Tracy in a very difficult position. Does he issue a statement distancing himself from T.I. or does he say nothing?”

T.I. was referring to the comments Morgan made during his stand-up show in Nashville earlier this year. The remarks got out after an upset fan — Kevin Rogers — posted the rant to Facebook.

“I figured at some point the gay jokes would fly and I’m well prepared for a good ribbing of straight gay humor,” Rogers wrote. “I have very thick skin when it comes to humor; I can dish and I can take. What I can’t take is when Mr. Morgan took it upon himself to mention about how he feels all this gay sh*t was crazy and that women are a gift from God and that ‘Born this Way’ is bullsh*t, gay is a choice, and the reason he knows this is exactly because “God don’t make no mistakes” (referring to God not making someone gay cause that would be a mistake). He said that there is no way a woman could love and have sexual desire for another woman, that’s just a woman pretending because she hates a f*cking man.”

Morgan also said he’d never accept his son if he was gay.

“He said that if his son was gay he better come home and talk to him like a man and not [he mimicked a gay, high pitched voice] or he would pull out a knife and stab that little N (one word I refuse to use) to death,” Rogers added.

Morgan repeatedly apologized for the comments and even met with GLAAD to talk about tolerance and what he’s learned since his show.

“First thing I want to say is I apologize to Kevin and to people who were at the show for bumming them out,” Morgan said. “I want to apologize to my friends, and my family and my fans. I didn’t know, I didn’t mean it. I don’t have a hateful bone in my body. I don’t believe that anyone should be bullied or just made to feel bad about who they are… I really don’t care who you love, same sex or not, as long as you have the ability to love.”