The family of Michael Jackson has zero sympathy for Conrad Murray after a judge handed down the maximum sentence: Four years in jail. 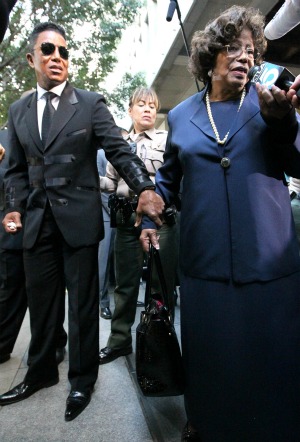 Michael Jackson’s family is speaking out after Conrad Murray was sentenced to four years in jail for the pop star’s death — and they have zero sympathy for the doctor.

Katherine Jackson, Michael’s much beloved mother, told reporters outside the courthouse that four years in jail is “not enough.” By law, four years is the maximum sentence the judge could impose in this case.

“Four years won’t bring my son back,” Katherine said, but acknowledged that the judge was fair by throwing the book at Murray.

In a press statement, a lawyer for the estate of Michael Jackson says Murray’s lies only compounded his guilt.

Calling the four-year jail term “appropriate and called for,” Howard Weitzman said, “The egregious conduct of Dr. Murray when ‘treating’ Michael Jackson was bad enough, …but when coupled with his outrageous lies in trying to cover up his wrongdoing after Michael was dying and/or had died only served to magnify his criminal actions.”

“Michael Jackson was one of the greatest entertainers that ever lived and he will be missed by millions.”

During the sentencing hearing a family statement was read to the court.

“We are not here to seek revenge,” the family said. “There is nothing you can do here today to bring Michael back. But we will keep the love in our hearts that Michael embodied throughout his life. His passion was for unifying the world through the gift of his artistry.”

“We respectfully request that you impose a sentence that reminds physicians that they cannot sell their services to the highest bidder and cast aside their Hippocratic Oath to do no harm. As we all know from this tragedy, doing so can have devastating results.”

Conrad Murray was remanded immediately to the Los Angeles County Jail, where he has already begun to serve his sentence.