How is Hollywood reacting to Dr. Conrad Murray’s jail sentence in the Michael Jackson manslaughter trial? They aren’t exactly on Murray’s side, either.

Conrad Murray is probably spending his day getting accustomed to the jail cell he’ll call home for at least a couple of years. The disgraced doctor was sentenced to four years in prison Tuesday morning for injecting Michael Jackson with a fatal dose of propofol. 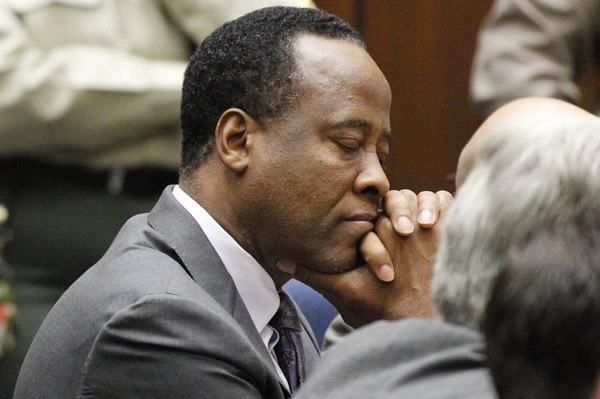 “Dr. Murray engaged in a recurring, continuous pattern of deceit and lies,” Judge Michael Pastor told the courtroom. “There’s umbrage and outrage on the part of Dr. Murray against the decedent.”

However, Judge Pastor was much more forgiving than other celebrities and Jackson’s own family. Several weighed in right away on their favorite soapbox: Twitter.

As a recovering addict, Kelly Osbourne identified with Jackson and blamed Dr. Murray for his lack of ethics.

“[G]lued to my TV watching the Conrad Murray sentencing!” she tweeted early Tuesday. “[I] hope they make an example if him his obsession w/ $ killed MJ DR’s are meant to save lives not take them!”

“[I] dont even think we need to discuss this any more Conrad Murray’s face says it all! #EmotionlessGuilt,” she added. “4years is not enough but just think where ever he goes what ever he does he will b known as the man that killed MJ that to me is #justice!”

Real Housewives of New Jersey star Caroline Manzo was surprised at the judge’s fury toward Murray.

“This judge is really laying it down to Dr. Murray,” she wrote.

The TMZ mogul was following the sentencing and gave his blow-by-blow appraisal of the situation.

“So Judge Pastor just gave Murray the max — 4 years in prison…which will be served in County Jail and he’ll serve a max of 2 years,” he tweeted, adding that Murray contributed to his sentence with the MSNBC documentary.

“The documentary bit Murray in the ass. The judge was pissed that Murray trashed MJ in the documentary and accepted no responsibility.”

CNN and TV One commentator had a suggestion for Murray after his sentencing.

“Yo Conrad, just stand up and cuss the judge out. You’re getting the full four years anyway!” he joked.

“The sentencing of Dr. Conrad Murray to four years in prison by no means ends the injustice suffered by Michael Jackson nor does it in any way mitigate the fact that his children have lost a father and the Jacksons have lost a son for the rest of their life,” he wrote.

“While I approve that the Judge gave the highest sentence permitted by law and that he used harsh language in condemning Dr. Murray’s recklessness, the sentence is light compared to the damage Dr. Murray and those that may have participated (and went unpunished) have received in relation to the damages they have done. For those of us who knew Michael and loved him this is not a day of celebration. It is a day of continued pain because of the loss of a great artist and friend. I do hope it sends a signal to those that would prostitute their professional skills for money and pleasure while violating the oath of their profession.”

Rapper and actor Ice Cube was disgusted with the amount of time Murray received for his crime.

What is your opinion about the Conrad Murray verdict?

Read on for more Conrad Murray

Conrad Murray is final act in Michael Jackson’s life
Conrad Murray’s mom is begging for mercy
Nancy Grace on Conrad Murray: God will get him