How long has Katherine Heigl been keeping her hatred of male anatomy a secret? The actress discusses, at length, how she really feels for the funny “I Hate Balls” campaign. 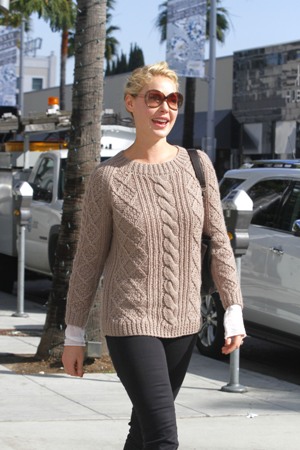 Katherine Heigl has a passion for helping animals and if that means coming clean about her hatred of balls, the actress is willing to do it. Watch the clip… err… video as she vents about “terrible, terrible testicles” below!

“I’m movie star and Maxim 100 member Katherine Heigl,” the 33-year-old starts out in the “I Hate Balls” mock public service announcement. “A lot of people say to me ‘Katherine, you promote neutering so much, you must really love animals’ and I’m like ‘yeah, they’re ok I guess.’ But the real reason I’m so pro-neutering is — I hate balls. I really do.”

“Unfortunately I can’t cut the nuts off human men — yet,” she quips in the video. “So I’ve dedicated my time to the neutering of dogs because that’s legal.”

It’s all a joke in one of the latest celebrity video installments on Funny or Die — sort of. You see, while Katherine Heigl probably doesn’t hate balls with as much passion as she depicts, she really does want viewers to donate to help castrate animals. The Jason Debus Heigl Foundation, named for the actress’ late brother who passed away at age 15 after being involved in a car accident in 1986 , raises awareness for and supports pet spay-neuter programs.

Who’s that making a cameo at the end of Katherine Heigl’s Funny or Die video? Why it’s her loving husband of nearly five years, Josh Kelley, requesting to get his balls back and be allowed to go out for the night with the guys. Looks like the “I Hate Balls” faux PSA was filmed before Josh went under the needle to have his devotion to Katherine and their daughter Naleigh permanently penned on his arm!

Watch the raunchy faux PSA “I Hate Balls” from the folks at Funny or Die if you dare!

Do you support the “I Hate Balls” campaign? Share Katherine Heigl’s Funny Or Die video!