The Kardashians may have made millions off of their penchant for exhibitionism, but Daniel Craig is no fan of their shows — or their fame-whoring. 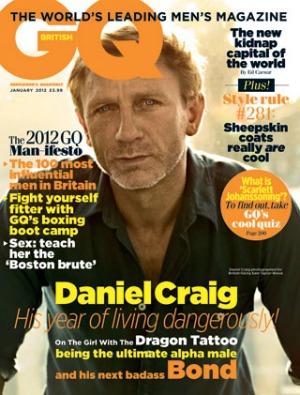 Daniel Craig is an intensely private person — so much so that his wedding to Rachel Weisz was attended by only four guests and kept under wraps from the press. No surprise then that he can’t stand it when celebrities air their dirty laundry all over television, and he hold reality TV stars in even greater contempt.

In an interview with British GQ, Craig holds nothing back when expressing his disdain for the first family of reality television.

“Look at the Kardashians, they’re worth millions,” he told the mag. “I don’t think they were that badly off to begin with but now look at them.”

“You see that and you think ‘what, you mean all I have to do is behave like a f***ing idiot on television and then you’ll pay me millions.’ I’m not judging it — well, I am obviously.”

“I think there’s a lot to be said for keeping your own counsel,” Craig said.

“It’s not about being afraid to be public with your emotions or about who you are and what you stand for. But if you sell it off, it’s gone.”

“You can’t buy it back — you can’t buy your privacy back. ‘Ooh I want to be alone.’ F**k you. We’ve been in your living room. We were at your birth. You filmed it for us and showed us the placenta and now you want some privacy?”

Far from the madness that was Kim Kardashian’s multi-million dollar wedding, Craig’s own nuptials to Rachel Weisz were kept under wraps — and he still doesn’t want to talk about it.

“We got away with it. We did it privately and I’ve got a lot of people to thank for that,” he said. “But that was the point, we did it for private reasons.”

“Because we didn’t want it f**ked up, because that would be sharing a secret. And the whole point is that it was a secret. A secret is a secret in my mind.”

“Look, I’m in love,” he explained. “I’m very happy. And that is as far as I’m prepared to go. Life is long, life goes wrong and I don’t want to say something now that might be thrown back later.”

Read the entire interview with Daniel Craig in the January issue of British GQ.