Conrad Murray has been given the stiffest sentence possible in the Michael Jackson manslaughter case. How long will he spend in jail?

A Los Angeles judge threw the book at Conrad Murray today, handing down the toughest sentence possible: Four years in county jail for the death of Michael Jackson. 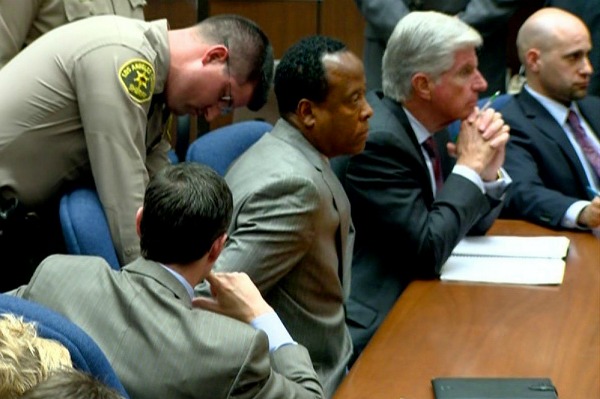 Judge Michael Pastor handed down the stiff sentence for several reasons. One, he believes that as a doctor, Murray willfully betrayed Jackson’s trust by giving him sub-par care. He says that Murray knew Jackson was an addict and provided him with propofol anyway. The judge was also ticked about the MSNBC documentary and the taped conversations between Murray and Jackson, which he feels prove that the doctor planned to profit from the relationship — and death — all along.

“Dr. Murray engaged in a recurring, continuous pattern of deceit and lies,” Judge pastor said. “There’s umbrage and outrage on the part of Dr. Murray against the decedent.”

Murray has been sentenced to four years in the Los Angeles County Jail and has been ordered to provide DNA samples for the state DNA bank. Refusal to do so will be considered a separate crime. He also must pay appropriate restitution to the family and estate of Michael Jackson in an amount to be determined at a later hearing.

The prosecutors were asking for $100 million from Murray, a sum his defense team says is not even remotely within the possibility for him to be able to pay. The judge wants to see more detailed financial information from the Jackson estate showing exactly how much money they lost after Jackson’s death from lost concert ticket and album sales.

Murray will be given credit for the 23 days of actual time he’s already spent in jail, plus 23 days off for good behavior, which will be subtracted from his total four year sentence. Due to overcrowding, Murray may only serve half his total sentence.