It looks like The Talk star Sara Gilbert is rebounding quite nicely from her breakup with longtime partner Allison Adler — she’s now dating songwriter Linda Perry. 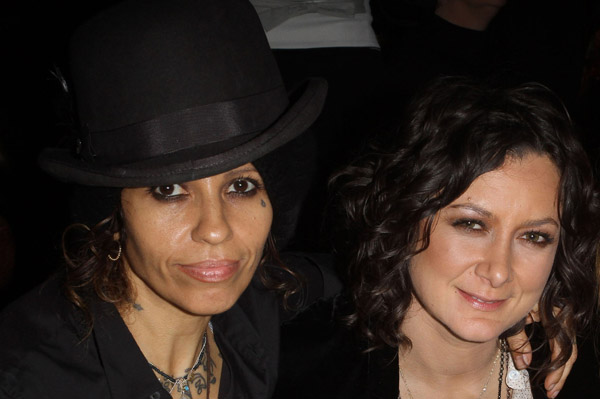 The famous duo was spotted grocery shopping over Thanksgiving weekend.

“Grocery shopping with @THEsaragilbert. Her contribution: breaking the balsamic vinegar trying to figure out if she had spotted Bill Cosby,” Perry tweeted.

Perry — a songwriter with credits that include Christina Aguilera‘s “Beautiful” and Pink‘s “Get the Party Started” — was also photographed with the former Roseanne star at the 40th Anniversary gala for the Los Angeles Gay and Lesbian Center earlier this month.

The new relationship is a happy change for Gilbert. She tearfully talked about her breakup with Adler on her chat show co-starring Sharon Osbourne.

“I feel like I don’t know if marriage is all it’s cracked up to be,” Gilbert said on the show in September. “I’ve never been married, but I was in a long relationship… It’s emotional for me, because we’re not together.”

“I wouldn’t trade that time, it’s such a special time in my life,” she continued. “But then you see people in their 70s and you wonder how do they do it? How do they make it last? And I would like to think that I can.”

She then talked about her children with her ex-girlfriend, Levi, 6 and Sawyer, 4.

“I will say that we have beautiful children together, a lot of love for each other,” she said. “You do continue in to the next chapter together in a different way.”

Here’s hoping Gilbert is finding happiness — at least in the short term — with Perry.

Do you think Linda Perry and Sara Gilbert make a good couple?