Seth Rogen says it’s not his buddy James Franco’s fault he bombed at the Academy Awards — instead, we should blame the Oscar bosses. 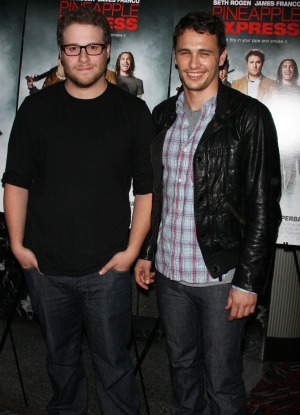 James Franco totally bombed as co-host of the Academy Awards in February alongside the newly-engaged Anne Hathaway, but at least one person is standing by his side: fellow actor Seth Rogen.

Rogen is defending his Pineapple Express co-star Franco, saying it isn’t the controversial actor’s fault his performance sucked so hard — it is the fault of the Oscar bosses who gave him age-inappropriate material.

“I think when you agree to do something like that, you put a certain amount of faith in the institution, hoping that they’ll take care of you, and I feel like they didn’t,” Rogen told Shortlist.

“Why hire James Franco and then give him Billy Crystal’s monologue? It was like, ‘Oh, we’ll hire these young hosts and then we’ll just do the same sh*t we do every f*cking year.'”

“Which to me was really odd. I think they just approached it wrong. They didn’t think it through, and they were way underprepared. I think they hung him out to dry. So I wouldn’t do it unless they hired some better writers.”

Not that Rogen has to worry an invitation is shortcoming — that old favorite Billy Crystal will be back at the 2012 Oscars after Eddie Murphy jumped ship. Sounds like the writers will already have some material for him.

Not that James Franco is sweating it. The jack of all trades has a hot new project coming up: He will direct and photograph the multimedia spring campaign for 7 For All Mankind, including both print and online video components.

“I’m not supposed to say too much, but we don’t want to do something that feels very fashion-heavy,” explained Franco to Women’s Wear Daily from Michigan, where he is currently filming Oz: The Great and Powerful. “It’s a more natural kind of approach. It’s not a heavy-handed fashion world sell-job. It’s really about bringing the natural essence out of the performers and models.”