TLC’s T-Boz is in a big financial mess — she’s filed for bankruptcy for the second time in less than a year. 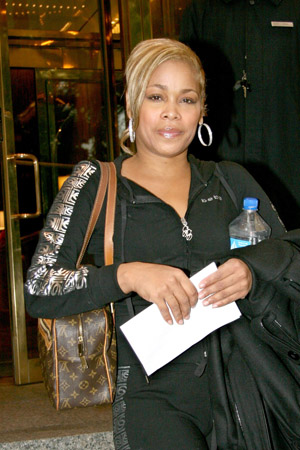 Former TLC lead singer Tionne “T-Boz” Watkins filed for bankruptcy protection for the second time in less than a year, according to court documents. This time, she filed in a Georgia court to match her filing in the United States Bankruptcy Court of Northern District of Georgia in February.

Oh, she also filed for bankruptcy while raking in the cash with TLC back in 1995.

Yikes… mo’ money, mo’ problems, you know? We suspect a lot of it has to do with medical bills for her long battle with sickle-cell anemia and unpaid child support from the fathers of her children.

T-Boz, 41, is more mature about her financial difficulties these days. Back in the day, the girls of TLC decided to take matters into their own hands when they felt like Arista Records’ Clive Davis was holding onto their cash.

“We had the limo driver, he was the getaway car,” she continued. “So we went up there, and Puffy [Sean Combs] was the one that snitched us out because we kicked him out of the meeting. It was rude — we interrupted Puffy’s meeting. We were getting sick and sweating, and we were really working hard for [the] money and we wanted to know who the hell had our check. [LaFace Records head] L.A. [Reid] said [then-Arista chief] Clive had it, [so] that’s where we went.”

They ended up getting their money and avoided jail.

“They did give us some money, but they still took it back and recouped it, but it’s all good,” she explained. “You live and learn in the business.”

It does sound like T-Boz needs a financial intervention, though. Get Suze Orman on the phone, stat!