Bow Wow has some big-time troubles these days, thanks to nearly $100,000 in unpaid taxes. Hey, Bow Wow, the IRS wants your cash! 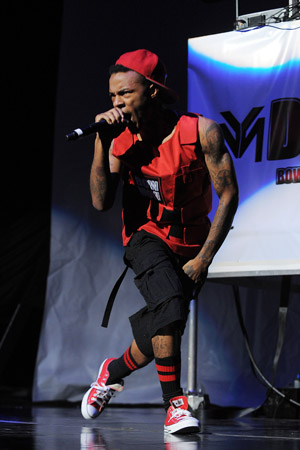 Bow Wow has admitted some of his secrets this year, including his new baby daughter and suicidal thoughts. However, he’s adamant that he doesn’t owe a boatload of money to the IRS.

Bow Wow — real name Shad Gregory Moss — owes the government $91,105.61, according to TMZ. The money is owed from unpaid taxes in 2006, according to the tax lien filed in Florida.

“We all know not to believe anything that the media writes or blogs,” the rapper and actor wrote on his basically unreadable blog (black background and white font? No, thanks). “It’s their job to entertain the minds of the simple minded.”

“Remember Ima (sic) always keep it 100 with yall and let yall know the real on anything I got going on even if its bad if it’s the truth I’ll own up to it.”

However, there is one thing he does want you to do: buy his album, Underrated. The upcoming album on Cash Money Records includes collaborations with Bird Man, DJ Khaled and everyone’s favorite Twitter ranter, Chris Brown.

It’s not out yet, though — and he has an excuse for it. “I know yall want this album just as much as i want to deliver it. The thing is tour just ended like 3 n half weeks ago,” he wrote in the blog.

But whatever you do, Bow Wow advises you to “stay away from them damn blogs — it’s bad for your health.”

But, how would he communicate with fans if they have to stay away from blogs? Didn’t think that one out, did he?

7 mins ago
by Daisy Maldonado